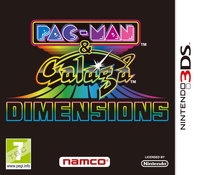 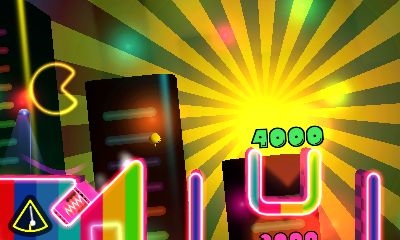 Pac-Man and Galaga Dimensions 3DS is a grab bag of retro gaming goodness. My dad loved the 3D originals and me and my friends dug the Championship Edition, but really there should have been fewer games and more bells and whistles.

I know Pac-Man and Galaga are supposed to be classic games, but I've never really understood why. My dad is always excited when they re-release these games and will literally play Pac-Man, even the basic original version, for hours.

For my birthday this year he bought me this Pac-Man and Galaga Dimensions game for the 3DS - I've been struggling to find a game for it since I finished Zelda Ocarina of Time. I think he had half an eye on the game for himself, but before relinquishing control I gave it a good run around.

The game includes the original Pac-Man and Galaga games from the arcades as well as ports of Pac-Man Championship Edition and Galaga Legions from XBLA. Then there are two new games: Pac-Man Tilt and Galaga 3D Impact.

I spent a bit of time playing the various games before settling on a clear favourite - the Championship Edition game. Unlike the sedate original where your aim is to basically survive as long as possible, here the game takes on a frantic action feel. Instead of clearing mazes you have to rack up as many points as you can in five minutes.

Championship Edition also looks totally unlike any Pac-Man game I've played before - and not just because it's in 3D. In a similar way to Space Invaders Extreme you can score points in all sorts of way and collect all kinds of power-ups. It basically looks a bit nutty, but is great fun to play.

I had a couple of friend round while I was trying it out and we got into a bit of a score race with each other - seeing who could get the most points. Although we had to take it in turns to play this worked OK because we knew each game would only be five minutes.

I also liked the classic Pac-Man and Galaga versions which apply a 3D effect to the 8-bit graphics, like Excite Bike and Xevious have done in their eShop iterations.

Pac-Man Tilt was harder to get my head around. It felt a little like a Sonic game crossed with a pinball table. The level is filled with flippers and springs that you need to work with to collect the dots and chomp ghosts. It's all controlled by tilting the 3DS - and interestingly you have to turn the 3D off too.

Galaga 3D Impact is closer to the original and on that basis I think it works better. The view is in first person though and the game is more like a FPS than shoot 'em up - as my dad still calls them.

There's been a lot of work gone into all the different versions included. In some way though I think they could have gone for less diversity and focused more on one or two killer versions.

My dad, who now has firmly claimed ownership of the game, pretty much only plays the original Pac-man and Galaga games. When I get it out of his hands I still play the Championship Edition the most.

If they had done this, maybe some of the wired blind spots could have been avoided. I'd have like to see a vertical orientation option for Galaga to match the original's screen (you would hold the 3DS like a book - as became quite popular for DS games). I know this would mean that the 3D would have to be turned off, but the improved fit of the screen would be worth it.

I'd also have liked to see a proper high score table for the games. When I get the game back from my dad, if he has beaten my score it gets wiped from the game - there is no history of what you've scored. Odd eh! Luckily me and my friends can use the online leader board to keep track of who's owning who each week.

This sounds a little negative I know, but I'm only being a little hard on the game because of how much fun I've had with it. The range of games means that there is something for everyone here, but the real quality lies in the Championship and Original 3D versions. Pac-Man Tilt and Galaga 3D Impact are nice to have, but I'd have preferred better multiplayer and scoreboard options I'd happily forego these two. My dad however, is over the moon to have another chance to play Pac-Man - maybe it's a mid-life crisis thing.

Arkham Asylum's Freeflow fighting system - easy to pick up but difficult to master.

You can support Rowan by buying Pac-Man and Galaga Dimensions