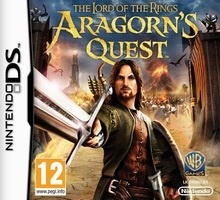 Other GamePeople columnists have reviewed this from their perspective - huh?:
Reporting Gamer (PS3)
Family Gamer (Wii) 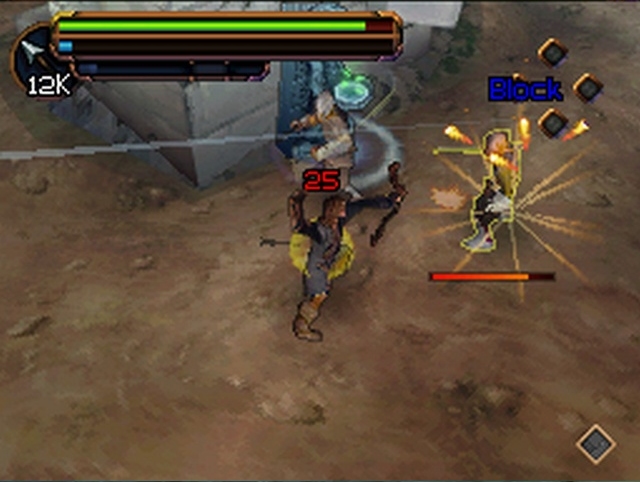 Lord of the Rings Aragorn's Quest DS suffers next to the impressive Wii version. It's an adequate rendition for the DS's small screen, although one that should probably not have been ported to the PS2 and PSP.

Lord of the Rings Aragorn's Quest is a very different game on the DS (PSP and PS2) than it is on the Wii, 360 and PS3. Whereas there you have an open world brawler game with excellent co-operative play and side machines galore, on the DS you have something much more paired down.

As in the big console versions, Aragorn's Quest on the DS is divided into movie chapters as Samwise Gamgee tells the story to his children. But without a shire to explore, the game play that flows from this tale is much more linear - totally linear in fact.

The game play revolves around slashing your way through a series of themed environments as wave upon wave of enemies assault you. It's not a million miles away from Gauntlet - only without the camaraderie of other players or those classic lines "Elf needs food, badly".

You do have different attacks which is quite nice. But most of my friends agree that compared to the Wii game this is pretty lame. Along with Aragorn's swordsmanship - which ranges from light attack to heavy attack across the DS's face buttons - he can also use a bow for long-range attacks.

I was impressed with the massive trolls you meet later on.

The enemy hoards are interspersed with larger enemies that need a little more attention than the usual button mashing. These foes need you to match your attacks with their cyclical gestures to hit them when their back is turned or armour is down.

I was impressed with the massive trolls you meet later on - enough to show my friends how good they looked on the DS. It took me quite a few tries to realise that this is why the game had previously given me some special attacks. Once I started using those I could progress again - much to my friends' delight.

The PS2, PSP and DS versions are pretty much the same, so it doesn't take a genius to work out this makes best use of the DS's horsepower - as the lowest common denominator. The game is rendered in a forced 3d that I actually thought looked pretty cool. The DS version also has some neat touch screen moments where you need to tap or trace particular actions on the screen to progress.

In my book any excuse to revisit Middle Earth is worthwhile.

Although I sound pretty down on Aragorn's Quest DS, that is probably more about my expectations from playing the Wii game than anything particularly detrimental here. I can't deny I missed the multiplayer features and exploration of the Shire, but still there were not a few hours of enjoyment here, and in my book any excuse to revisit Middle Earth is worthwhile.

You can support Rowan by buying Lord of the Rings: Aragorn's Quest