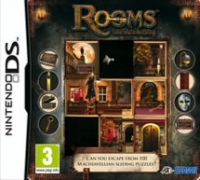 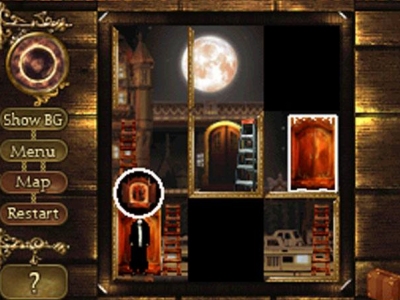 Rooms turns sliding puzzles from a simple distraction on long car journey's to something much more exciting. The combination of puzzle elements and reconstructing the picture from the tiles makes this game as good for me as it is for my younger sister.

Rooms is a sliding puzzle game, that follows up the recent popularity of hidden object and brain training on the Nintendo DS. But unlike these other games, Rooms has some new ideas. Rather than finding hidden objects or solving puzzles separately, here you do both at the same time.

You start each level with a grid of tiles - just like the slide-picture puzzles you may have played when you were younger - but in Rooms you can only move the tile your character is standing on. This, combined with a range of special objects - ladders, teleporting phones and the like - make it more challenging complete.

Rather than a static picture puzzle you have something with much more life in it. You can often quickly work out where you need to get the different pieces of the puzzle, but it takes longer to work out how to achieve that. For instance you may need to move the tile to your right, but before you can do that you need to get your character to it using the various ladders, teleports and other items - as well as the usual piece sliding.

It all starts off quite easily with earlier levels being completed in just a few minutes, but as you progress the puzzles get bigger and more complex. Each level you complete also takes you a step closer to solving one of the mansions, which in turn grants access to the next. There are 100 puzzles to complete in the game as a whole.

I really liked the pixelly feel of the game.

Although I think some people may find Rooms The Main Building to look a bit dated, I really liked the pixelly feel of the game. It felt a bit like Professor Layton with its distinct quirky style. The sounds I was less keen on - although this can be turned off if you don't like it.

I used to leave these sorts of puzzle games to my younger siblings, but even a few minutes with Rooms and I was pretty hooked. Because it is much more complex than other games like this, and more based on logic than general knowledge or mathematics, I got on with it much better.

I've gone on about it so much with my friends that a few of them have started playing it as well.

I still have some way to go before I have completed all the puzzles - and I think I will keep going to the end. I've gone on about it so much with my friends that a few of them have started playing it as well - which is impressive as they usually stick to shooters.

You can support Rowan by buying Rooms The Main Building