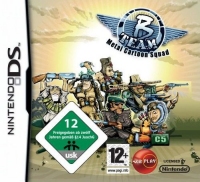 The B Team: Metal Cartoon Squad is an arcadey, simple squad based shooter on the Nintendo DS. There are four environments and thirty levels to blast through, as well as a co op mode.

To be direct - I did not find the game fun at all. The B Team: Metal Cartoon Squad just feels very limited. I mean, 30 levels sounds like quite a lot, but considering they are all effectively the same it's not that much. You basically have to kill everyone in your path on each one. The fact that there is only four different environments is also a huge limit.

The game experience pretty much consists of killing everyone on the desert map followed by getting to the other side of the desert map and then repeating this 30 times until you've finished.

There are weapon pick ups, such as a more powerful machine gun and a rocket launcher scattered throughout the maps, which make the carnage more, carnagey? But that's it. There's no storyline, no particular lasting upgrades, nothing.

The bosses are more interesting and save the game from total mediocrity. They play out pretty much as you expect, but they break up the game and are pretty fun. Unfortunately it's not long before you're on to the next level.

Watching things blow up as you spray bullets across the level is pretty satisfying.

Something that might be interesting is the 'Fully Destructible Environment' that is promised on the back of the box. Unfortunately, I seem to have a different understanding of Destructible. Shouldn't it mean something along the lines of – being able to blow up everything, affecting the level as I do so – shooting a wall so that I can take a shortcut.

Maybe it's just me but I find that The B Team: Metal Cartoon Squad DS definition is slightly different.Basically, you shoot something a few times, and the image of, say, a building is replaced by a burning building. Shoot some more and the building will explode and the image will be replaced by rubble. It rarely makes a significant impact on the level, as it makes no actual difference to the game play if the graphic is of a building or of rubble. I can't see why this is a feature, as it adds little to the game. Then again, watching things blow up as you spray bullets across the level is pretty satisfying.

I feel like I'm missing something major, because I just don't see the point in this game.

Co op is an option, but I have no idea what it's like. Maybe I was doing it wrong, but I think that you need 2 copies of the game to play so I never got to try it. I don't think that you're likely to happen to have a friend who coincidentally also bought the game, so what is likely the most fun section of the game is locked away from most people. It's a shame, because the best thing about arcade is co-op, and whilst the single player experience is dull, perhaps playing with a friend would breathe some life into the game and add longevity.

There's nothing here that can't be found elsewhere in better form. I feel like I'm missing something major, because I just don't see the point in this game. It lacks very basic features that would make the game more enjoyable.