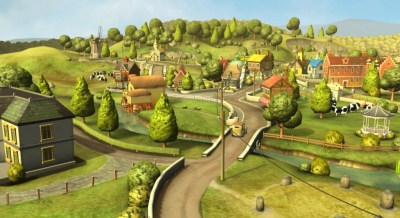 Blue Toad Murders promised to be derivative, but turned out to be excellent fun for me. I even took the PS3 downstairs so my family could join in. Bright, clean, crisp fun that I wish had gone on a lot longer.

Blue Toad Murder Files PSN is a murder mystery video game developed and published by Relentless Software. The game is episodic being released periodically via Sony's PSN store. It boasts up to four players while leaning towards TV murder mysteries with witnesses, alibis and motives.

I didn't expect much from Blue Toad Murder Files. Its puzzle-like mini games are not usually my cup of tea. However, after playing the game for a few hours I released how wrong my initial thoughts were.

It was a dark, rainy morning when I first installed Blue Toad Murder Files on my PS3; quite a contrast to the game's bright sunny fantasy town of Little Riddle. After navigating a simple menu and selecting one player with my chosen detective, the game began with a narrator setting the scene. The first few characters of the game were introduced, one in particular being a funny old woman who rambles on and on, appropriately named 'Mrs Gossip'.

I was catapulted into my first puzzle - it was simple really. I had pictures of all four detectives in front of me, the task being to match the correct names using the subtle clues. I completed it quickly enough to earn myself some praise from the narrator and a Blue Toad gold medal.

I did something which I never thought I would, moved my console downstairs and asked my family to join in.

That was surprisingly fun. One thing led to the next with slightly harder puzzles being thrown at me as I progressed through engaging storyline. Then I did something which I never thought I would, moved my console downstairs and asked my family to join in.

I chose four players and we were off. It was great fun and before long my whole family had assembled in the room, shouting out their advice for each puzzle.

After about half an hour we were all engaged, and believe it or not teamwork was actually coming into play. Ten or so puzzles in and the game's first episode draws to an end, and as it did the final chapter title 'whodunnit' appeared before us.

We all had to think long and hard using the evidence we had acquired throughout the game to try and select the guilty suspect. Once we were all in concordance I selected the suspect. There was a nerve-wracking period of time as we waited to see if we had been correct in our skills of deduction. The narrator finally announced that we were correct leaving the story of Little Riddle on a cliff-hanger.

The next two episodes were saved for another time, but they featured similar brain-testing puzzles mixed into the cocktail of a narrated storyline. One particular one which I thought was very clever was listening to sounds and then associating the right images with those sounds, so for instance footsteps up a wooden staircase would sound distinctive. Each new sound and you plotted the route and then submitted your answer, once again simple but nevertheless enticing.

It sounds like a simple premise but there are few games on the PS3 that have the ability to draw in whole families.

Not only did this game manage to get my whole family playing, it also had us working together to solve the puzzles. For me it was a complete delight to play and despite being short at just a few hours.

Blue Toad Murder Files is an accomplished game that's accessible family fun. Teamwork, observation and deduction are all called upon to succeed. It sounds like a simple premise but there are few games on the PS3 that have the ability to draw in whole families. The game is definitely worth checking out if you're looking for something to do with your family for a few hours over the weekend. A real surprise.

You can support Rowan by buying Blue Toad Murder Files