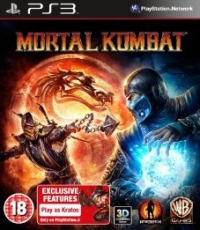 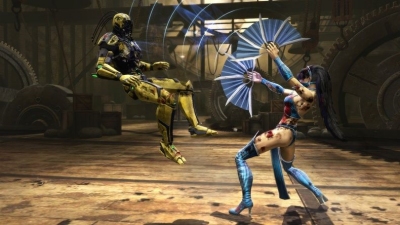 Mortal Kombat gets a series reboot. But rather than a stripped back arcade original, my friends and I found a game aimed squarely at us -- and anyone after some blood drenched raucous fighting fun at home.

I don't remember the original arcade versions of Mortal Combat the first time round, but I have played it on an old Sega Megadrive version a few years ago. There was something strangely fun about the over the top violence and decapitation, even back then.

Having had various spin offs and sequels this version of Mortal Kombat goes back to the simplicity (and gore) of its roots. Although I'm old enough to play it, I had to make sure that my younger brother wasn't around first. This is pretty gruesome stuff.

It's all really exaggerated, but that's why I love it. This actually makes it a bit more palatable, because it's clear Mortal Kombat isn't about real world violence at all. In fact it's more of a parody along the lines of Monty Python, more funny than grotesque.

Beyond the headlined blood and guts there is a pretty good fighting game underneath. Being a girl means my gaming friends don't expect me to like games like this, or to be particularly good at them. This just makes it all the more fun executing a fatality on them as I clean up in our multiplayer sessions.

Those of us who aren't quite as practiced (or as good) at fighting games can still have fun playing. There are enough simple moves and a beginner can still inflict a fair amount of damage on opponents. One of my friends did pretty well just using the X-ray moves, triggered by clattering the buttons. It's the sort of visually impressive attack that's usually locked away behind complex combination in games like Street Fighter or Tekken.

Being a little more adept means that I've focused my efforts on learning the relatively in depth combo (and tag-combo) system -- which has had the most work on since the last game. This is also the first Mortal Kombat game where I have wanted to develop my skills with a range of characters.

We've spent a lot of time in the Versus mode, but there are a load of other things to do as well. The Ladder single-player mode is back again but now joined with a Story mode that's packed full of Mortal Kombat trivia and history for those (like me) who like to find out about these things.

Then there's a Challenge Tower mode if you want a quick match with a little more variety that the usual single player. This is rounded off by a range of mini-games that offer some of the most unusual uses of Mortal Kombat fighters I've seen - touching on the bizarre.

If you can put your politically correct sensibilities away there is a lot to enjoy here.

This maybe a Mortal Kombat reboot, but there have been some very sensible design decisions made along the way. Whereas the original Mortal Kombat games were clearly targeted at the short intense thrill of the arcade, this is clearly meant to be played at home. For me and my friends this really worked.

We weren't expecting this to distract us from our regular sessions on Street Fighter and Dead or Alive, but actually we've played nothing else on our Saturday afternoon meet-ups since we got hold of Mortal Kombat.

If you are looking for a nuanced, highly technical fighting experience this isn't for you. But if you can put your politically correct sensibilities away and embrace the visceral hyperbole of Mortal Kombat's overblown battles, there is a lot to enjoy here.

You can support Rowan by buying Mortal Kombat