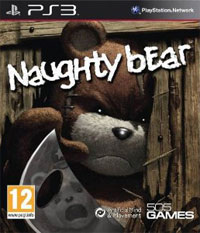 Other GamePeople columnists have reviewed this from their perspective - huh?:
Tech Gamer (PS3)
Dressup Gamer (360) 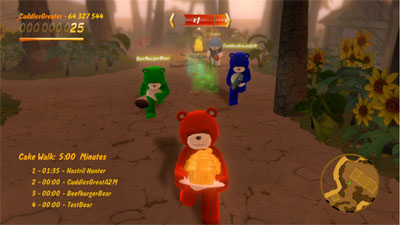 Naughty Bear has been a closely guarded secret. The buzz has been increasing for months, the hype has been hyperbolic and my anticipation fever-pitch. And on both Xbox 360 and PS3 Naughty Bear looks right up my mischievous street - like a turbo charged Dennis the Menace.

Ever since hearing of its development early this year I've been eager to see what the fuss has been about. The premise is simple. Naughty Bear lives on Paradise island with all the other bears, shunned and teased for being, well, naughty. According to the trailer he tries to make a peace offering at Daddles' birthday party but after being rejected begins his naughty rampage across the island.

All this is a simple excuse to enable you to take control of Naughty Bear and perform some amusing and, at times, disturbing acts of violence to the bears of the island. You'll be able to bash a Bear's head in with a hammer, throw them on a grill or dish out revenge with a giant meat cleaver.

What makes this so funny or disturbing is the cute character designs that the game portrays the bears with. They all appear as cuddly teddy bears each with their own personality that makes them seem innocent and alive. Having quite a twisted sense of humour with my friends we found all this wonderfully entertaining and it's good to see another developer taking the same approach as Fairytale Fights.

When I told my friends about this their eyes widened at the prospect of causing a Grand Theft Auto level of chaos within such a cutesy setting.

It's a world of opposites with cuteness and violence on the same page - some that makes for a very cool experience and even though the mechanics of progressing to the next level - by earning naughty points - seems a bit contrived, it all serves to split up the awesome concept into digestible chunks.

The interesting part of the game is how open-ended the world becomes. Apparently there are no scripted events, instead all the bear's antics is completely dynamic and random. This means you can set up traps or set-pieces of your own accord and create some pretty unique cascading events. For example, driving a bear to suicide or killing a bear in plain sight might turn the witnesses insane with fright, leading to crazy scenes of self-exploding bears or mass suicides. Hardly appropriate, but great fun if you like your humour as dark as the night.

When I told my friends about this their eyes widened at the prospect of causing a Grand Theft Auto level of chaos within such a cutesy setting. In many ways this is Grand Theft Auto crossed with a slasher film with the visual charm of the Care Bears. They also instantly wondered if Naughty Bear would have any multiplayer and I was pleased to report that it does.

To be honest I'd take a bog-standard death match with this art-style but these modes all sound wonderfully inventive.

With four modes offering a mix of competitive and co-operative game play the one I like the sound of most is Golden Oozy. Here, one player faces off against the others with the golden oozy of doomness - the most powerful gun in existence. With unlimited ammo the only way to wrest control away from the player is to team up and take him down with a backstab. I love the way this encourages some deceptive team play and the reward of having a stupidly powerful gun to play with afterwards.

Other modes include a typical team death match and a mode that has one team making the biggest jelly in the world whilst one player (as Naughty Bear) attempts to sabotage and kill everyone else. To be honest I'd take a bog-standard death match with this art-style but these modes all sound wonderfully inventive.

The unlockable costumes that effect your stats also add a layer of depth to the teddy bear violence. Hats can give you a strength or speed boost whereas full outfits can give you a disguise to be a bit more stealthy with your violence.

Naughty Bear looks like it works. They avoid going over the top with blood and gore - stuffing is spilled here rather than guts. This keeps Naughty Bear firmly in the humorous camp and the potential to cause so much teddy bear violence makes this game one of my most anticipated titles of the year.

You can support Rowan by buying Naughty Bear