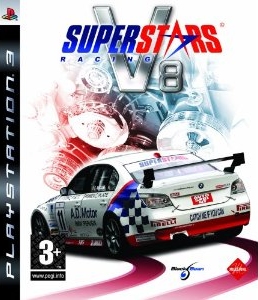 I ducked Superstars V8 Racing Next Challenge technical challenge and found just as much fun racing in terms with my family. For petrol heads the main game offers plenty of v8 detail, but for people like me there is still some competitive racing to be had - even if we had to take it in turns.

Licensed by the Italian Championship racing league, Superstars V8 Racing Next Challenge gets you out on the track to test your skills with V8 engines. It features some of the most important car manufacturers in the whole world, such as BMW, Audi and Jaguar, and sporting top class production cars. From car design to technical engine features, from the setting of the races to the turns of the tracks, everything has been designed in authenticity to the real thing.

I've always loved a good racing game, despite this though I'm not the sort of person who knows every conceivable detail about V8 cars. So after navigating past the menu eager to try out my first race, I'm stuck on the pre-race menu that offers ten different options to tweak my car. I didn't know that setting the wings of the car at maximum inclination for instance, would make my breaking incredibly difficult when approaching corners. It's clear then that this game is aimed at V8 car lovers.

After giving everything a go it didn't feel like the game did anything different to other racers, aside from the extreme v8 detail. I was disappointed by the lack of a split-screen option which I wanted to try out with my family. We ended up taking turns to race on the different tracks via time trial mode.

Once someone had set a good time we all took it in turns to try and beat that time, essentially we were creating our own game within a game.

After they had grasped the basic controls we were off and it was soon really competitive - with the times being shaved each lap. I had perhaps underestimated my family's ability on a racer such as this. That's probably because these types of games on PS3 don't seem to be aimed at families.

Pass the controller then, was the name of the game here. Once someone had set a good time we all took it in turns to try and beat it, essentially we were creating our own game within a game. Whether the developer, Black Bean Games, had intended people to play like this I wasn't sure. We eventually moved onto racing against other computer controlled cars, seeing who could come in the best position. Every second was enjoyable.

After a good few hours of play it was clear that everyone had enjoyed the competitive nature of the game - we ranted on about whom ultimately was the best. To no surprise we didn't reach an answer.

It was simply about racing people who I could have some genuine fun with in the cosiness of my front room.

Before I had introduced my family to the game though, it was just your average racer. However, playing with them added that spark needed to really bring the game alive.

We had a real blast with the game. It wasn't an experience focused on the single player championships or winning cups, it was simply about racing people who I could have some genuine fun with in the cosiness of my front room.

You can support Rowan by buying Superstars V8 Racing Next Challenge