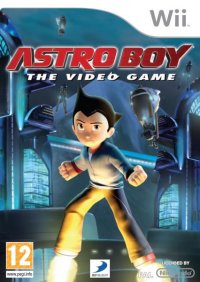 Astro Boy is a shadow of the game my older brother used to play. This is a film tie in rather than the genuine next game in the series, which for me is a bit of a shame.

Astro Boy is the game tie-in of the recent film release. It features the voices of Freddie Highmore and Kristen Bell, reprising their film roles. In the game, players become the iconic hero, Astro Boy, and take to the streets and skies on an epic adventure to save Metro City from the clutches of the evil President Stone and his robot army.

From my first look at the manual I could tell this wasn't going to blow me away. But a remained optimistic and loaded the game up. I was presented with several choices at first, start the game, options, and configuring the controls. Interestingly you can choose whether to use motion controls or the other being standard, they both seemed the same.

After choosing my difficulty and controller options I was left watching a three minute clip from the movie explaining the narrative. The game started with me moving Astro Boy around with the Nun-chuck in a 2D pane, very similar to the style of New Super Mario Bros Wii.

Soon after I was wall jumping with my hero and eventually even flying. It all felt very Mario indeed; but sadly this particular game isn't in the same league. After some more jumping and flying around and familiarising myself with the controls I encountered my first proper flying section of the game. It felt fun for the first 5 minutes. Enemies circled like the games of old as I fired my laser beams, and Butt-machine guns. Yeah. Unfortunately the repetitive nature of it all started to creep in. Enemies fly on screen; destroy them, repeat until end of level.

The boss stages do shake things up a little bit and admittedly it is fun to use all your super-powered moves to completely nail them into the ground.

Sadly much is the same for the standard stages which let you control Astro Boy on in 2D; this literally revolves around punching enemies with some very limited platforming chucked in the mix. The boss stages do shake things up a little bit and admittedly it is fun to use all your super-powered moves to completely nail them into the ground. The problem is they are simply too easy, even with the difficulty at the start cranked up to 'Hero' mode. There is also an Arena mode where you face off against multiple foes in increasingly harder waves. It's a nice extra and the experience of doing it in two-player is quite fun; however, an extra mode is not enough to save such a repetitive and frankly dull game.

The game is accompanied by a pretty strong soundtrack which plays most of the films heroic-like soundtrack, and if I'm brutally honest it's the best feature of the game. It won't take long before your whistling the main theme as I know I was, it's just a shame the game doesn't repeat this high quality throughout.

If you loved the film then you'll surely enjoy the game, but New Super Mario Bros is just a better platformer in every way for young and old alike, stick with that instead.

My younger brother who really enjoyed the film, thought this was better than I did. I can see that at times the game can be fun, but for me Astro boy doesn't deliver enough. If you loved the film then you'll surely enjoy the game, but New Super Mario Bros is just a better platformer in every way for young and old alike, stick with that instead.