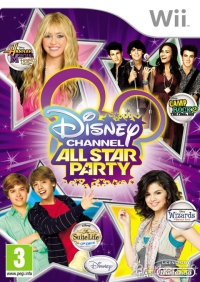 Disney Channel All Star Party is novel only because of its Disney theme. Me and my friends wished that the Mii's were unlocked from the start, but managed to pass a few hours reminiscing over the shows all the same.

Disney Channel All Star Party looks much better than most of the other minigame collections I've played - apart from Nintendo's own games like Wii-Party. It is also pretty cool to be able to play as characters from the Disney shows me and my friends watch.

But while Hannah Montana, Camp Rock, Wizards of Waverly Place and The Suite Life are a big draw, me and my friends actually just wanted to play some games together as our Mii's. Although the box says you can do this, you actually have to complete all the activities in the game before you are given access to your Mii's. It seems kind of mean, after we played for the game, not being able to access all the features.

And some of them are hard. We thought we'd get Jake (he's easily the best player amongst) to play through them quickly to unlock the Mii features, but even he struggle to get the top score on some levels.

Each game is well thought through and presented.

In amongst the games are a few that really stand out. There's one in the Suite Life On Deck collection that we got pretty addicted to. Like the other games up to four of you play at once, but the twist here is that while one player tries to score points the others can get in their way. In this particular game you have to try and cross a beam over a pool without falling off. The other players then try and knock you off as you progress.

These sorts of game mechanics have obviously had quite a bit of thought put into them. Although the actual controls are all pretty much just waggling to move - and would be better just using buttons - the way you compete against other players like this is actually quite clever.

As well as the headlining shows included in the game, there are also some Disney franchises aimed at younger audiences. Although we are too old for them now (ed: too old for Disney, never!) we actually found playing games, themed around these shows our younger brothers and sisters watch, more fun. Phineas and Ferb and Sonny got us reminiscing about when we used to watch them.

It was a little too young for me and my mates.

Disney Channel All Star Party may not add much to the minigame genre, and doesn't try and match Wii-Party's innovation, but each game is well thought through and presented. If you still like the shows on the Disney Channel you'll enjoy being able to play with those characters. In the end it was a little too young for me and my mates - but that didn't stop us from having some fun with it for a while.

You can support Rowan by buying Disney All Star Party