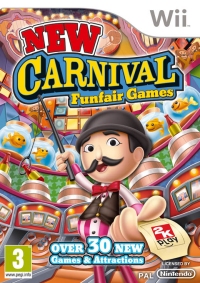 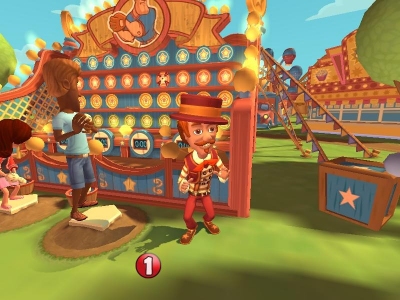 New Carnival Funfair Games makes clever use of MotionPlus to aid targeting and navigation for younger players. Otherwise though, it's more of the same from one of the first party games to really make use of the Wii's abilities.

I liked the original Carnival Games on the Wii, but I was never all that sure what the fuss was about. I think it was popular because it came out pretty soon after the Wii was launched - so there wasn't as much choice as there is now.

The funny thing is though, even with the hundreds of Wii minigame collections on offer now, things haven't really moved on all that much. What has happened is that Nintendo themselves have followed up Wii-Sports with more great games like Wii-Sports Resort and Wii-Party. When I want to play some minigames with my friends these are the games we usually choose because they make such good use of the controller.

New Carnival Funfair Games is essentially a re-release of the original but with support for the MotionPlus block that gives the Wii-mote controller a lot more accuracy. Some of the games are different and there is a new achievement system where you win prizes for completing certain tasks, but this is essentially the same game.

The game itself revolves around a fairground setting where different minigames are grouped into themed streets. These games involve a variety of throwing, shooting, catching and strategy. Each one can be completed in a few minutes and if successful earns you tickets to access new activities.

You can play the game with up to four people - we roped in mum to make the numbers up. This works better on some games than others. There are quite a few where you have to simply take turns, so you can be waiting around for a while. The better ones, like the Haunted House shooting, let you all play together to try and get the highest score.

New Carnival Games uses the MotionPlus controls to help you point at the screen a lot easier.

I was a little disappointed at first as the controls really don't seem all that different to the first game. Whereas on Wii-Sports Resort you can see your on-screen character mirror you moves, on New Carnival Funfair Games they only move once you trigger your shot.

It makes it feel a little dated to me, what with all the new Motion Controlled Games like PS3's Move and 360's Kinect, Carnival Games aims at the really low end.

There is more to this than meets the eye though. When the first game came out my younger brother was four and struggled to join in with us. I remember him getting really frustrated trying to point at the screen with the Wii-mote - it was just too fiddly. He's a few years older now and of course had no trouble playing New Carnival Games.

With MotionPlus the Wii is much better at working out where you are pointing.

What surprised me was seeing how well our youngest brother, (there's three of us in our family) who is now also four, got on with the game. New Carnival Games uses the MotionPlus controls to help you point at the screen a lot easier. Whereas before it was a struggle to even get your pointer on the screen, with MotionPlus the Wii is much better at working out where you are pointing.

It's a small thing, but it made a big difference. I could play the game with both my brothers now. This, combined with the pretty cheap price (we paid GBP 19.99) makes it good value for families - particular where there are quite a few younger kids.

You can support Rowan by buying New Carnival Funfair Games