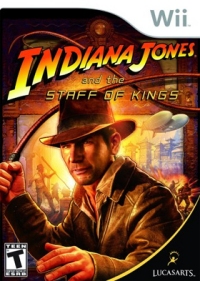 LucasArts adventuring proves again it’s had its hay day - Monkey Island, Day of the Tentacle and Grim Fandango this is not.

I’m a big Indy fan. So it’s easy for me to love this game, but I’ll try to outline the good, the bad, and the ugly. Good is the story, atmosphere, training missions and the thrill of fighting and using the whip with the remote - it’s so realistic and pretty responsive.

Bad, well blatantly that’s the graphics. They are almost from the PS1 era, so not great. It’s also bad you can’t skip previously watched cut scenes, especially when they are really long and right where the restart point is. Ugly is those restart points! Having the now common Wii Motion Events in here is fine, but they are often erratic and I dreaded them when it meant redoing a whole section to try again, including those cursed cut scenes. Every bleeding time.

So it’s cinematic and fun with lots of variety. And the interaction with the remote is inspired. But some of the Wii Motion Events are hellish beyond belief and frustration levels aren’t helped by having to redo things with cut-scenes. A real shame as it tarnishes the good bits and the cool collectibles and bonuses.

Given the rich subject matter, this game is a missed opportunity. I love it, but others may end up getting mad.

You can support Steve by buying Indiana Jones Staff of Kings