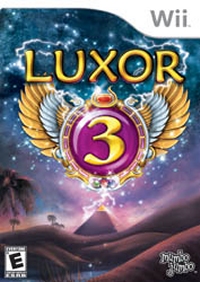 One-touch puzzling heads back to Egypt for some solid marbling action.

It sounds like a new brand of soap, but trust me - Luxor 3 is awash with challenge and addictive elements and nothing has been watered down. Ok, no more puns - just a quick summary. An easy game to get into, I found myself quickly shooting an increasing line of marbles that were rolling down the screen with other marbles of similar colours. When any of them match colours, they disappear and often help with power-ups. And if the marbles miss, then the line rolls down to the end and it’s goodbye Egypt. I really loved the ease of the premise and the balanced difficulty curve, as it meant I had fun working out strategies and the best shooting approaches way before the speed was ramped up and the gameplay got to be more fiendish. As a result, I became totally immersed in the game and the graphics.

Puzzle games have hooked me in recently - and Luxor is no different but being on the big screen rather than the DS is a nice change and allows the marble shooting madness to work even better with engaging gameplay. This means it’s easy to see the next move but hard to execute. Great stuff.

A hidden gem on the Wii, well ported from the PC. Worth picking up, especially at a bargain price.

You can support Steve by buying Luxor 3