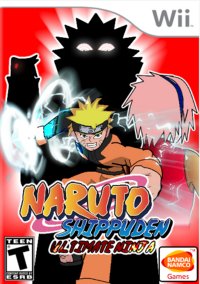 Naruto Shippidem Ultimate Ninja 4, with a name like that, this demands to be an epic. In some ways, it is.

I'm greeted by a shouty kid who sounds like he was in the Goonies film. He offers me lots of nice options: The slow moving linear Story is up first, then I have a stab at the Hero mode, where you take on various battles from the previous versions of the game. Apparently.

I watched lots of cut scenes to try and get into the story and role play elements, as well as bashing my A button more times than in the last 6 months combined during many random fights. I learnt new cool moves and levelled up about 4 times, but for all the effects and whizz of set piece attacks, mashing A did the job every time. Bore-ing.

The training mode lasted for about two hours, which meant things progressed really slowly with lots of repetition, dialogue and none of the free roaming promised in the manual. Just cool combos.

Having ploughed around seven hours of game time into this, I'm still not sure what is going on, or worse - how I'm winning and beating the bad guys. It all looks cool (I think) but I can't tell what is happening in the battles and get the feeling that as a non fan, it's a bit ‘style over substance'. If you're not very patient, avoid this.

Impressive fight scenes and lots of storytelling. A bit too much of aimless wandering, button mashing and CPU aided combos for me, but fans will love it.

You can support Steve by buying Naruto Shippudem Ultimate Ninja 4