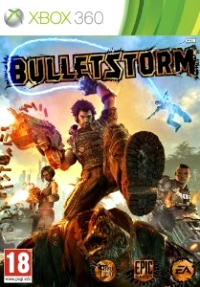 Other GamePeople columnists have reviewed this from their perspective - huh?:
Family Gamer (360)
Tech Gamer (360)
Reporting Gamer (360) 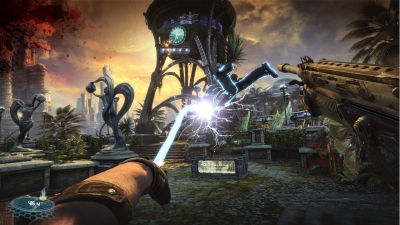 "oh Grandad-who-used-to-be-in-Bulletstorm, what big boots you have." "why, all the better for kicking the dick off everything my dear."

yes, if this were one of those 'summarize the game in a one paragraph parody of a classic fairy tale' review sites then my work would be done. but, alas, as things stand, i will have to indulge in a few more lines.

a few months ago i reviewed the special treat that is Duke Nukem Forever, and then had to take some time off. now i'm back, and in the spirit of facing up to my daemons i thought i'd offer a few thoughts about Bulletstorm, a kind of spiritual forebare of the Duke's, published by EA and Epic, that's been lying around in my game dungeon since early this year, and which (given the ending) likely has a sequel in the pipeline.

as is almost always the case (sic), the artwork on the box gives you a decent idea of what to expect thereafter. the forced perspective employed in the depiction of Grayson Hunt, the game's central character, makes his left foot (mid-stomp) and fully automatic assault pistol (mid spent-cartridge spew) huge, whilst rendering his head very small indeed.

however, those who didn't manage to interpret the signs successfully, along with those who are inspired by the idea of a man whose overactive stomping-foot is several times bigger than his brain, may well be somewhat surprised by what they find upon loading Bulletstorm up. for a few seconds, anyway.

the visuals are certainly a cut above what i was expecting, and setting the occasional frame rate or aliasing issue aside, offer some genuine appeal. then come the gameplay, the narrative and the dialogue, and we're swiftly back in line with expectations.

to be fair (unlike in Duke Nukem 3D) the gameplay isn't terrible. in fact in places it's quite enjoyable. the basic task involves running around shooting unfriendly aliens of various dispositions and ilk, or, for more points (which means prizes), you can lasso them with your laser whip, toss them, flailing, into the air, and then shoot them in the groin - or, even better, kick them into a giant cactus, or some sort of rotating machinery.

most things in life tend to reveal the potential for greater richness and fulfilment than was obvious from the outside.

the trouble is that aside from the odd nice moment, there isn't much new to see or do. the bad stuff with which you are confronted and the tasks that you are enjoined to undertake all basically conform to the most familiar of first person shooter cliches.

the narrative is generic tab-A-into-slot-B revenge-fuelled fare with some semi-interesting equivocations thrown in (although they don't stem from the Huntinator). the main issue, however, is how painfully linear the progression is. i'm not sure i've played anything so 'straight-down-the-line' since Lost Planet - remember that? no, well i can't blame you.

then there is the ending. i'm not going to spoil it, but when i say "sequel" you say "set up", "sequel"... anyway, you get the idea there. who knows, given the timid sales whether we'll ever see one. who remembers Psi-Ops? OK, 0 from 2.

on a more dynamic note, the most distinctive aspect of Bulletstorm is its dialogue - and this where the comparison with Duke Nukem Forever comes to the fore. the humour is pure puerility wrapped in a wave of near-incessant vulgarity. there are probably more f-bomb explosions than regular ones (and it's not exactly light on those). you know the cliche where the old guy tries to seem cool in front of some kids by continually and unnecessarily swearing his brother-fucking bollocks off? well this is fairly that.

while there isn't as much overt sexism in Bulletstorm as its younger cousin, there is a strong sexual overtone and a couple of incidences of that more recent and subtler form of homophobia that seems to be in every military film and TV show of the post 'Don't Ask, Don't Tell' era. you know, the one where one guy pretends to be 'a gay' to test if another guy isn't appalled by it, then everyone laughs (implicitly) at how 'wrong' or 'dark' or 'messed up' the scenario would have been had it not been in jest.

they must have held their breath when Duke Nukem Forever finally came out. but that would have been a short-lived scare.

they no doubt saved money by getting some guy to carve twenty minutes out of his strict udd Apatow/Robot Chicken regimen to scribble down a script instead of paying some actual designers to make the levels less one-dimensional, but the worst thing is that the game will probably do better as a result. at least, they must have thought, the fruity talk and edgy humour constitutes a USP (whereas being similar to but worst than Halo would not have). they must have held their breath when Duke Nukem Forever finally came out. but that would have been a short-lived scare.

apart from comparisons with Duke Nukem, another advantage of reviewing the game so long after release is the ability to reflect on the mini media storm it caused in the US, and the interesting and instructive responses from the makers.

Fox News roundly condemned Bulletstorm, even wheeling out a psychiatrist who after some vaguely sensible remarks about the ongoing trend for marrying sexual material with extreme violence in movies and games, made the reactionary and utterly unsubstantiated claim that the increase in rape cases in the US "can be attributed, in large part, to the playing out of such scenes in video games."

it was also interesting to see EA respond by, on the one huge boot, defending their approach on artistic grounds (laughably citing Kill Bill and Sin City as other examples of the same thing), and, on the other, sending out the head developer to part apologise for, part plead ignorance about the swearing, on grounds that neither he nor anyone on his team is a native English speaker. funny how the swearing is the issue they felt they needed to give way on. it was also amusing to see criticism emerge on the basis that the content was obviously targeted at a young, adolescent audience.

You can support by buying Bulletstorm