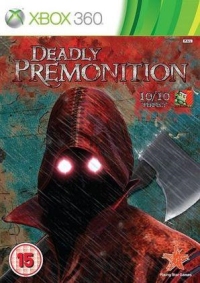 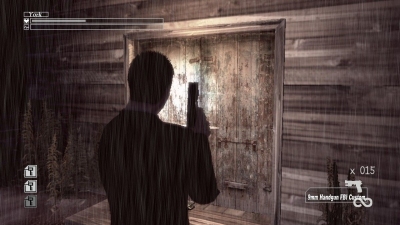 "sure it's a budget title that's nearly two years old, but apparently it's a cult classic."

whether i annoyed the wrong person at G.P. towers, or have perhaps been the victim of a 'welcome back' practical joke, i'm not sure precisely what earned me the pleasure of Deadly Premonition's company this week, but whatever it was i hope the debt is now paid.

if you, on the other hand, were hoping for some advice regarding twenty one month old, strange, B-movie/Resident-Evil rip-off games, then this is your lucky week. lucky, lucky you.

i don't know about you, but i missed Deadly Premonition when it came out, hot as it was on the heels of Hard Rain, and certainly at least vying for the title of 'the 360's answer' thereto. since then it has apparently split the critics. some say it was judged too harshly because of the previously mentioned comparison, and that despite its many (obvious and frankly egregious) faults, it comes good thanks to possessing a wit, charm and (much like Bugsy Malone) a style all of its own. others, however, don't say that. instead, they say something like this...

some games genuinely reward a willingness to look beyond flaws, perhaps even significant ones. some games gain cult status because although they are technically or aesthetically unsophisticated, they have at their core something that puts those who would judge them for what they lack to shame and makes fools of us all. Deadly Premonitions, however, ain't.

if you don't believe me, go ahead, sit through the several hours of tortuously bad dialogue sandwiched between the sequences which exhume and reanimate the tiredest of horror clichés, presented in a world populated by the most lumbering, lifeless character models, explored by means of sludgy, auto-facepunchingly inaccurate controls, decked out in the most eye-abusingly bad graphics and 'enhanced' by the most unwittingly hilarious sound effects and risible voice acting. in fact, call me first and you can, by all means, have my copy.

Twin Peaks seems to have been wheeled out by this game's defenders.

perhaps the worst part of all is the way that Twin Peaks seems to have been wheeled out by this game's defenders, as if somehow the moronic, tedious kookiness and Swiss-cheese plot on offer here is the equivalent of Lynch's bizarre masterpiece. Lynch (and Mark Frost) might have revelled in creating ugly characters, unsettling scenarios and unnerving realities, but what they also did was learned how to write a script and frame a shot brilliantly. if you want a Lynchian comparison, try Eraserhead - Lynch's slowest and most challenging film - or Dune - his much maligned adaptation of Frank Herbert's epic sci-fi novel - but even these outstrip this game in terms of quality by a large factor of ten.

in Deadly Premonitions, by contrast, we apparently encounter the result of a bunch of strange things placed in a bag, shaken vigorously and then presented in the exact form in which they emerged.

the lead character is an FBI agent with a tripartite name, a dissociative identity disorder and a penchant for reading too much into things he thinks he sees in his coffee. we plod our way through this super-dull, free roaming open-world, survival horror monstrosity peering over his shoulder as he jerkily (almost) lights cigarettes and chats away to his alternate personality, 'Zach'.

the gameplay (although it seriously stretches the definition of both aspects of that compound adjectival noun) is a combination of sub-Resident-Evil clue collection/zombie shoot-up and slow, seemingly endless sub-Grand-Theft-Auto driving sequences set in a The-Sims-style one-third-real-time, free roaming environment (yep, that means you have to play for eight hours to progress the story by one day).

there are some nice ideas among the tedious dross: a neat 'controlling your breathing whilst hiding in a locker' moment, some interesting-ish puzzles, a novel use of in-game quizzes and some surprising plot twists, but these are nowhere near able to redeem everything else.

it was far worse than washing up, vacuuming, dusting or folding linen.

perhaps it speaks to a limited imagination or lack of patience on my part, but i found playing through this game a chore. in fact, i take that back - it was far worse than washing up, vacuuming, dusting or folding linen. it was a chore if your usual chores include things like scraping thick, yellow tobacco residue from the wooden fixtures of an old working-man's club.

given all the time that has past i can't really see why you would anyway, but I cannot report anything from my experience that would suggest you seek this game out. in fact, think carefully about taking it on if someone offers to pay you for your time - i know i should have done.

You can support by buying Deadly Premonitions