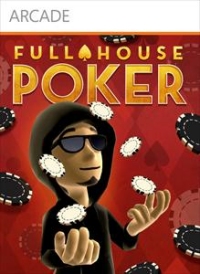 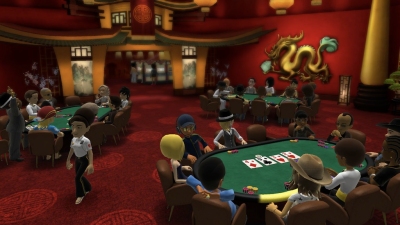 there's a saying in poker circles: "never play cards with a dying man". the point (which i'll elaborate even though it's obvious) is that you never want to gamble against someone who has nothing to lose.

playing poker (which as anyone who reads my blog or follows me on Twitter will know, is something of a passion of mine) requires discipline, or at least playing it profitably does. what is more, because being disciplined involves limiting your involvement (i.e. folding poor cards), it necessitates a player having a worthwhile investment in their own success.

thus, a general rule for a good poker game is that, while (hopefully) no-one is courting bankruptcy, everyone is risking an amount that they'd strongly dislike to lose. playing for matches just doesn't cut it, unless you happen to be lost in the arctic.

the problem for poker video games has therefore always been how to create the sense that winning or losing matters. if there is no money involved, then the currency is entertainment. however - and this is the stumbling block for many a recreational player - as opposed to profitability, entertainment requires no discipline, in fact it often encourages the exact opposite. playing is always more fun than folding.

add to this the fact that you're playing against computer opponents who as well as having zero investment of any kind in the experience or outcome, can, like so many compulsive, robot billionaires, just reload every time you take their fake money.

the whole world has decided that it loves poker.

on the flip side of these observations that make poker themed computer games sound like a total waste of everyone's time, there is the fact that ever since a fat accountant with a curiously apt surname won two and a half million dollars at the 2003 World Series of Poker, the whole world has decided that it loves poker (and in particular Texas Hold'em) and regardless of not knowing anything about the game, wants to buy anything and everything to do with it.

Full House Poker, an XBLA title from Microsoft Games Studios, represents the most recent attempt to grapple with this thorny conundrum and come out 'up'. its weapons in the fight against poor quality play and existential despair are: access to and zany, poker themed animations of your Xbox avatar, fixed-time, online 'Poker Heat' competitions and a range of customisable features unlocked through an experience points system.

while i can't say any of these really achieved anything by means of convincing me that money-less poker has any real point to it, some of the details are quite fun. i did sort of enjoy watching my avatar dance around and play with his chips in the context of a graphical version of an all-together brighter, trendier and less seedy poker room than any i've ever played in.

it's also quite nice to be able to swing the camera all around the table, and to zoom in on any player's stats (by having your avatar get up and stare intently at the them - which everyone else can see). also, if you're unlucky enough to own a Windows phone, Microsoft have apparently done some neat thing in terms of cross-platform integration - so perhaps glimmer, light, end, tunnel and all that.

the trouble is that these 'touches' really are just fluff; rapidly melting chocolate sprinkles atop a luke warm, poorly stirred instant coffee. the thrill of seeing my avatar shuffle his checks and make overly-aggressive or comically-passive physical movements to accompany my bets has a very short half-life.

what is more, and perhaps this is just the degenerate gambler in me speaking, but i really don't care what the backs of the cards i play with look like, or what colour the chairs i'm sitting in are - and i don't know any poker players who would. all i care about is profit and i just can't see how any of this works without any being available.

even if we leave aside the meta, 'why' questions, there are deeper problems with the game.

even if we leave aside the meta, 'why' questions, there are deeper problems with the game. even if you are a poker fan who managed to get to grips with why you were playing, you are not likely to be very satisfied with the standard of your AI opponents. they all seem to play the game horribly, making tactical error after tactical error.

they overplay weak hands, make ridiculous calls with less than half a hand, bet when they should check and generally have no understanding of 'value' (the key concept in poker). but, then, why should they? they don't have anything riding on the game.

however, even if you manage to look beyond the fact that Full House Poker is ultimately pointless, slowed down by avatar animations that are fun for five minutes then get repetitive and annoying, and populated by a truly poor set of AI opponents, then you'll probably crack thanks to the amount of buttons you have to press to get the info you need to try to make the right plays.

long after you've given up using the triggers to select your avatar's playing style (with a whole two styles available), you need to remember which button it is that displays the stack sizes and continually press that, whilst also getting madder and madder about the fact that the size of pot (the other essential piece of information) doesn't seem to be available regardless of however many other buttons you press.

i have of course focussed in this review on the offline aspect of the game, but a whole other world opens up if you play online against your friends or the strangers you meet in the lobbies. a world which stinks of the question: why aren't we doing this on one of the many free Internet poker sites, when they work properly and are free?

if you like poker, play it: go to a local card room, or pub that hosts a game, or get a home-game together with friends. it will only cost you a modest amount to start to learn to play properly, and once you do you'll understand why putting a little money on the line is essential.

you'd love to love poker but you can't be bothered to get round to getting into it.

if you have no money to spend at all, and aren't bothered about playing properly, but would just like some cheep entertainment, then play your buddies for matches or sign up to one of the many free-play sites online.

what you almost certainly shouldn't do is download Full House Poker from XBLA for GBP 6. But you will, won't you, 'cause you love poker, or rather you'd love to love poker but you can't be bothered to get round to getting into it, but you're pretty sure, despite this review, that as well as being good fun, Full House Poker will help you to become a superstar poker legend millionaire.

You can support by buying Full House Poker