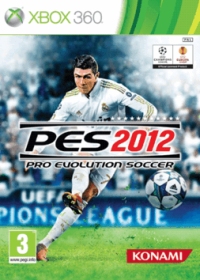 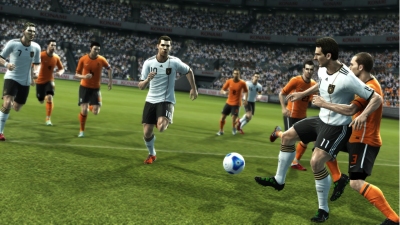 this giddy time of year, which is once again upon us, is when all games reviewers everywhere write head-to-heads (or is that heads-to-head?) about the two games in the hope that the Archangel Pelé, patron saint of football games, will select their effort to be The Head-To-Head King - an accolade for which they are rewarded with 450 copies of which ever of the two games they think is best.

however, given that my good friend Knick won the honour last year and found it difficult to shift his prizes, i've decided to rule myself out by reviewing PES 2012 without even mentioning FIFA 12. (apart from just then).

i'll also be attempting to avoid the vast pool of sim vs. arcade dichotomy cliches. i hope you appreciate that if stripped of these two tropes, the average review would be left with only a few, incomprehensible phrases.

there aren't too many large-scale changes immediately obvious upon loading up PES 2012, but it does appear that Konami have finally dispensed with the hideous neon colours and other horrendous menu styling options of reason years, in favour of something far more reserved; classier.

the familiar modes are back, but Master League and Become A Legend are this time round joined by Club Boss mode, which is your chance to pretend you're the chairman. personally, i can't wait for Kit Man mode in PES 2013, in which you get to clean, iron and otherwise prepare the players' boots, shorts and socks (shirt and undershirt management will be DLC).

although it's not terrible, Club Boss is a fair departure from the rest of the game, and i can't help think that it will receive at most a niche pocket of appreciation. the 'money men' aren't exactly popular among many football fans at the moment.

on the pitch is where most of the changes can be found, and i'm pleased to report that for my money the vast majority of them are very much for the better. the slow, super-precise passing mechanic of last year has been whisked away like so many old, drunk comedians, and replaced with a much spritelier, slicker, less fussy system.

Sacrificing a modest amount of realism for a far more enjoyable experience has to be worth it to my mind.

in fact the game all round is considerably pacier - and sacrificing a modest amount of realism for a far more enjoyable experience has to be worth it to my mind.

one of the more subtle changes involves a new AI system which has involved a rehash of computer teammates' off-the-ball behaviour, in both attack and defence. they hold the line more solidly and don't go ball-chasing so much at the back, and up top, they seem to be more instinctively in the right sort of places - making well-timed, often well-positioned runs of their own accord.

if you want even more precision of movement, however, PES 2012 includes an off-the-ball player control mechanic which, with a fair amount of practice, allowed me to have players moving exactly as i wanted them to. it's a deeper, more precise and far more satisfying version of the 'point' mechanic introduced in PES 2010 on the Wii, but it does take a while to master - i've been consistently using it for several hours and i'm still only on about a 60% success rate. however, when it works well, it definitely adds a smug-making je ne sais qua.

what is almost equally nice is that when you're playing the computer, whether you've directed them or not, the runs of your AI teammates will drag defenders out of position and thus can function as 'dummies' opening up space for you (or other AI teammates) to exploit.

no, the license situation hasn't really changed. no, it's not likely to change anytime soon. yes, it is especially bad for Premier League fans. if playing Swearcle against Northluck C is going to bug you mercilessly, then you're out of luck - why not try writing to EA and asking them to share more nicely?

there are various other tweaks like smoother dribbling and a seemingly robust fix to the 'catch up' bug (which allowed defenders who didn't have the ball to run about three times as fast as attackers with it). the visuals have been generally spruced and polished too, with stadia and player models benefitting from an added sharpness and realism.

It's a deeper, more precise and far more satisfying version.

however, talk about shooting yourself in the face - why, oh why, oh why, oh why do they persist in trying to show the players singing the anthem before international matches when it makes them look so ridiculous?? it's a 'no win' situation: even if it looked awesome, people would only watch it twice then get bored and skip over it from then on.

and that's not the only annoying acquaintance to return unscathed. while certainly better than they were, the goalkeepers are still what English commentators would describe as overly 'Continental'. less forgivable is the ever-present Euro-beat soundtrack and stagnant commentary.

the online experience definitely seems to be suffering from less lag, but that is probably more down to a management system that restricts users to playing against people in their region (Europe, Americas, Asia, Africa, etc.). if i were a Konami PR hack i'd describe the online experience as 'sleek' or 'straightforward' or 'focussed'. in other words there aren't a whole lot of options.

it's unlikely that the advancements and tidy-ups in PES 2012 are going to win over many fans of the-game-which-shall-not-be-named, but they will probably rejuvenate and reward loyal fans and will no doubt improve the franchise's recuperating reputation.

You can support by buying PES 2012