Seasame Street Once Upon A Monster 360 Kinect Review

Seasame Street Once Upon A Monster 360 Kinect 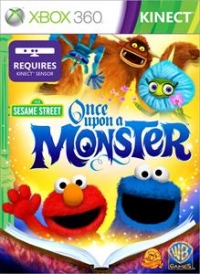 Other GamePeople columnists have reviewed this from their perspective - huh?:
Family Gamer (360)
Reporting Gamer (360)
Junior Gamer (360) 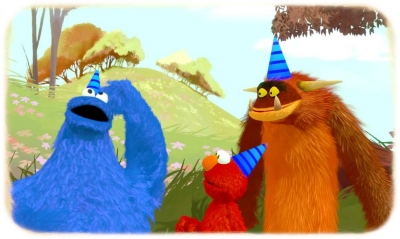 for me, this last weekend belonged Double Fine.

not only did i spent a large nugget of time staring in gleeful disbelief at the amount of money their new Kickstarter-funded Point and Click Adventure project was generating, but when some friends came to visit and brought their five year old, it seemed like a good opportunity to break open one of their as yet unopened recent Xbox offerings.

and as it turns out, said game, Once Upon A Monster, is a simple, Kinect controlled, Sesame Street branded and cartoon-story-book themed festival of colour, movement and joy.

i think i was originally sent this game by Game People HQ in order to subject it to a more critical eye than many of the somewhat soft reviews around and about seem to have. the trouble, however, is that playing it with a child - and in particular one who just wouldn't stop laughing and smiling - made it difficult to be grumpy. i almost forgot how tired i was and am. that having been said, our beloved editor will be pleased to know that it isn't without its flaws (although what/who is?).

given that she was on hand, and that Once Upon A Monster is not really designed for a childless adult, it seemed fitting to observe the response of our friends' spawn and use it now in the review process. in order to protect her identity, not only will her face appear pixellated if you try to imagine her, but we will also refer to her as Russell C, which is not her given name.

the game begins with an overly long and fairly pointless montage featuring the two central characters Elmo and Cookie Monster. Elmo shows Cookie Monster a magic book, Cookie Monster tries to eat it, etc., etc. Neither Russell C nor I enjoyed this bit.

i found it dull and she was bothered by the slightly ropey blending of green-screened puppets on animated background (the area above Cookie Monsters eyes is apparently especially poor). then, when we then had to reset the game (because the Kinect lead had come out of the back of Xbox) and go through it all again, we were both getting a bit twitchy.

Playing it with a child who just wouldn't stop laughing and smiling made it difficult to be grumpy.

luckily, however, once we'd got passed the prologue, and got on to opening the magic book and exploring its chapters, things took a turn for the more enjoyable. as long as Kinect has been properly set up and calibrated (warning: get the kids to do all that before the adults get interested - adults hate waiting) all you have to do is wave back at a waving Elmo and Cookie Monster and your ready to begin.

an aside is required here to commend Double Fine on the brilliant way in which they've not just utilised Kinect well during play, but have integrated the setup too - e.g. when you've successfully initiated Kinect by waving at Elmo and Cookie Monster, instead of receiving some Xbox-native notification or whatever, Elmo compliments you on your waving. Likewise if you need to something different to make the game work, a character will tell you so - beautifully simple solutions that maintain and reenforce the narrative world of the game.

reaching out you grab the right-hand page and wafting left turns the page - as with all the gestures in the game, the interface is very loose and unfussy enabling a child to take control. having said that, Russell did note that while i was taking a break and having some juice (Dr) Mrs Tired struggled a little with the controls. i guess there is only so much lack of coordination that even a well-designed childrens' game can tolerate before the whole thing becomes pointless.

each page of the book represents a chapter which introduces new characters (some from the existing Sesame Street cast, like Oscar and Grover, but mostly new monsters as per the title) and involves various types of mini-game. once you, unlike (Dr) Mrs Tired, have worked out how to grab the tabs at the sides of each page (arms straight out) and pull them apart to select that chapter (arms out to the sides) the adventure begins.

Beautifully simple solutions that maintain and reenforce the narrative world of the game.

in time we (Russell and I) were dancing, flapping, throwing, jumping, swaying, ducking, drumming, reaching, posing, blowing out candles and much more, to our hearts' content. each chapter was short enough to keep my attention and the movements simplistic enough for me to do successfully, and yet the experience didn't seem too boring for Russell either.

Once Upon A Monster does not, it must be said, offer the world's most creatively independent experience, and although i didn't really tire of its activities, i heard Russell C musing afterwards about the fact that it was essentially a dressed up version of ‘Simon Says'. once we completed the three or so hours of gameplay, we were both pleased to find a bonus ‘create your own story' level.

i found one chapter, which involved selecting outfits for a monster who was too shy to go to a party, a bit samey and dull. Russell C said that although she was generally pleased by the level of empathy that various of the chapters seemed to inspire, she was surprised that, in this one, confidence was aligned with clothing in a fairly un-progressive way.

The game would have been improved by a verse or two of Pinball Number Count by The Pointer Sisters.

generally, however, Russell C thought that the ideological messages behind the mini-games were fairly positive and reinforced ideas about concern for others, sharing, helping and an overarching sense of play as an expression of joy. she did mention that while the cartoon stylings were very visually pleasing and did a good job of drawing her in to the world of the game, she did feel some nostalgia for the days when Sesame Street was all real life, street based stuff and dungarees.

what is more, despite the game integrating Kinect brilliantly in a way that we both agreed was refreshingly unfussy and did a great job of putting as few barriers between young children and monster-themed immersive fun as possible, we both agreed that the game would have been improved by a verse or two of Pinball Number Count by The Pointer Sisters: "Onetwo, threefourfive, sixseveneightnineten, eleventwelve..."

You can support by buying Seasame Street Once Upon A Monster