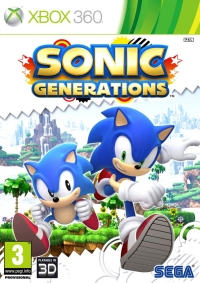 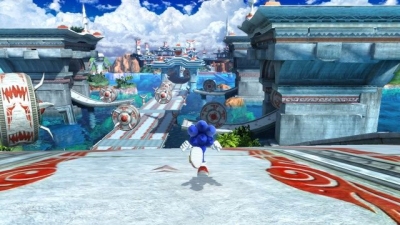 2011 has brought with it some significant and poignant anniversaries, but surely none more so than Sonic The Hedgehog's twentieth birthday (assuming that he'd just been born when the first game came out). the year's other major milestone, of course, marks ten years since Sega officially announced that it was giving up producing console hardware and was focussing solely on designing games for other platforms.

yes, like a croaky, ageing rock star who who half-fills moderate arenas in medium sized cities everywhere and sells more t-shirts than albums, these two facts combined mean that Sonic has now been continuously on tour for over half his career.

however, for someone who's been essentially sofa surfing for ten years, the blue blur is actually looking quite well on it (despite the fact that his nose is STILL NOT A SMOOTH SHAPE). there are no obvious signs of sustained hard-drug use or budget cosmic surgery; no string of expensive, acrimonious divorces; no invasive paternity investigations; and, at least thus far, no hints of viagra-dependency-induced bankruptcy.

however, what there also isn't any sign of is a graceful retirement. whether it's a case of 'i think i got one more in me, for the fans', 'trust us, this will reignite your career madstylez', or 'just do this and your contractual obligations are fulfilled', this year sees the release, just in time for Christmas, of Sonic's greatest hits album.

to be honest, to call it a greatest hits really doesn't do the sparkling trendiness of Sonic Generations justice. in effect, it's more like a sort of ultra-glossy, remixed mashup of levels, music, characters and gameplay from many of your favourite Sonic titles, and mine.

Sonic and his games elicit mixed emotions for me. for my thirteenth birthday i received my first proper console. having got really into gaming over the previous couple of years by means of my beloved Gameboy, and given that the SNES had launched in the UK to much acclaim only a few months earlier, my suspicion running up to my birthday was that soon Mario was about to disappear down a small, 8-bit, green and black pipe and emerge in a huge, incandescent, 16-bit world in our TV.

it would be wrong to describe the feeling as i tore back the wrapping paper to reveal the words Mega Drive as 'gut-wrenching disappointment', but profusely thanking my mum and feigning wide-eyed joy was sort of a landmark of maturity (possible a high tide).

feigning wide-eyed joy was sort of a landmark of maturity (possible a high tide).

of course, it wasn't all an act. i was by no means a spoiled child who was used to receiving expensive gifts - this was, given that i was a passionate Mario and Zelda fan, more a matter of confusingly confounded expectations. plus in 1992, the Mega Drive was, to utilise my favourite Cohenism, a perfectly cromulent console.

i soon put my unsettlingly surprise to one side, and dived right in to the dizzyingly fast, painfully colourful world of Sonikku za Hejjihoggu. despite the battering-ram of aesthetic intensity that was the original Sonic The Hedgehog (the novelty and impact of which is hard to describe to anyone too young to remember the games of the 80s), i never quite took to its insane pace and resultant sense of partially controllable chaos, aggressively cheerful music, relatively anonymous characters and odd storyline.

i tried to engage: i clearly remember sketching sonic several times in my exercise books, as well as the Sega Pirate skull thing from the adverts. as a Mega Drive owner, this was the appropriate paraphernalia of my identity. it was, however, a doomed propaganda exercise.

while i had some enjoyable gaming experiences on the Mega Drive, very few of them occurred in the company of the blue hedgehog, who, as i acquired some other games, became a mostly shelf-based spiny mammal. after less than a year, i told my mum that i wasn't that into games anymore, sold my Mega Drive and spent most of my time round at my friend Thomas' house, playing Mario Kart and NBA Jam on his SNES.

given these remorse-tinged memories, i've never found myself well-disposed to enjoy any of the subsequent Sonic games. Tails has always struck me as one of the most annoying characters in gaming (other entries on a postcard, or in the comments section below) and to my mind Knuckles will only ever really be the name of a character from Bugsy Malone. neither 'Labyrinth', 'Blast', 'Shuffle', 'Battle', 'Heroes', 'Rush', 'Colours' nor any of the other numerous Sonic spinoffs has ever captured my interest (although i should make it clear that i found Generations to be considerably more playable than any of these).

perhaps it's fair to say, therefore, that i am not part of Sega's core demographic for Generations, soaked as it is in all things Sonic. the levels are reinventions of stages from previous games, (re)designed to evoke both nostalgia and 'the shock of the new'.

the many nostalgic elements and in-jokes would be lost on most people.

you guide Sonic (as much as that's ever been possible) through a mix of familiar-ish 2, 2.5 and 3D environments to the strains of reworked versions of all the mind-dissolving music from which i thought i'd recovered. have you ever seen the episode of Family Guy in which, as a public act of contrition, Tom Tucker inserts a carnivorous earwig into his own ear? well, that.

aesthetically, in what is by now a time-honoured tradition, Sonic Generations continues full speed down Colours-so-bright-and-movement-so-fast-that-it-hurts Avenue. like the best of its forbears i found it to constitute something of an onslaught against my perceptive faculties, which unfortunately remain an experience that i still don't find all that enjoyable.

there's some sort of hokey storyline about ruptures in space-time and, as such, there are two versions of each of the main characters, which have to work together to help time back to good order. the reason why the colours of a Sonic game are passing so fast over the cells in my eyes has never interested me, and this was no exception - although it was interesting to note that one of the bad things that's going down in Sonic world is that colour is being stolen and the world is becoming white. i've got to admit, i was conflicted as to whether i felt anything needed to be done.

despite the bits of Sonic Generations that are good and well done, but just unappealing to me, it is sightly difficult to know who the target audience is. the many nostalgic elements and in-jokes would be lost on most people that weren't gaming in the early 90s, but i can't be the only member of my generation who isn't super keen to revisit those days, can i? having said that, the sounds emerging from the interweb suggest that hardcore Sonic fans (which is apparently still an existing demographic) seem very pleased. which is nice. for them.

beyond all the whizz and bang and spin dash, they'd find it fairly bewildering.

on the other hand, is Sonic really a big enough 'draw' to bring in those who never knew him as the face of a whole platform? ironically, and despite having an Xbox as well as a Wii, i think my nieces and nephews only know Sonic as a bit-part character in Nintendo games like Super Smash Bros Brawl or the Mario and Sonic At The Olympics titles, and i'm honestly not sure what they would make of it if i wrapped this up for them for Christmas. my guess is that, beyond all the whizz and bang and spin dash, they'd find it a fairly bewildering, unappealing and oddly short, experience.

although that could just be projection.

You can support by buying Sonic Generations