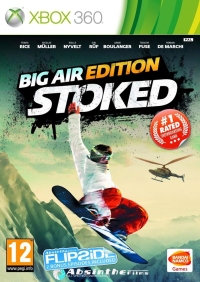 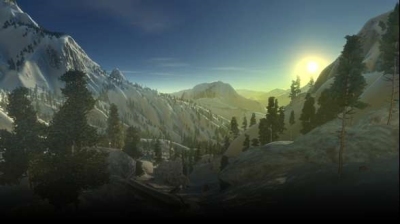 for some reason that failed to become fully apparent despite literally moments of Internet searching, the beefed up Big Air Edition of 2009's snowboarding tip StokEd - which was unleashed in North America only a few months after the original - has only recently arrived on these here shores.

having not played the US release, the second fact that my diligent research has failed to unearth is whether or not the game that has arrived here is exactly the same as that launched eighteen or so months ago in the States, or if our version was tweaked in parallel with the production of the PC port that has also just landed.

logic would suggest, given the time lapse, that if substantial work was on the cards, it probably would have been wrapped up into the dev work for a properly new title. in support of this inference is the fact that while the Big Air Edition doesn't look and feel super dated, it also doesn't exactly have that boxfresh shoe smell about it either.

unlike some reviewers, i was impressed by the way the original StokEd brought the control scheme in a little on the complex side in an attempt to up the realism factor, and while that favourable element is carried through in the Big Air Edition, unfortunately, so is one that I found a little less enjoyable.

my problem with StokEd was that although it felt pleasingly liberating at first, the 'open mountain' approach the game took to finding the various challenge spots soon got pretty dull, with what i thought an inordinate amount of time needing to be spent riding around samey terrain looking for things to do. rather than dialling this aspect back, however, the Big Air Edition has nudged it right up front like an awkward, unwilling soloist at a school Christmas concert.

this is only freedom as defined in classic Capitalist, neo-Enlightenment terms

the keyword in the marketing for Big Air Edition is freedom, a principle which has, according to the game's slogan, "zero boundaries". this, however, is only freedom as defined in classic Capitalist, neo-Enlightenment terms - i.e. as the maximalization of choice.

in perfect step with the meta-logic of the market, StokEd Big Air Edition professes the idea that the more choices you have, the more liberated you are, and, that (by extrapolation) boundless choice means total freedom. the game's marketing's emphasis on delivering "what you want, whenever you want" only bears this logic out further.

of course, despite its rhetoric and just like the markets, StokEd Big Air Edition is fundamentally and self-evidently unable to offer an experience of total freedom - even on its own terms - but merely the illusion thereof within what is actually and necessarily a fairly tightly controlled environment. my question, however, is why we even need this illusion.

being, as i am, politically and philosophically inclined to oppose the fundamental logic of Capitalism, and neo-Liberalism more generally, i prefer to define freedom as the ability to contribute to and benefit from that which makes for what Aristotle called "the good life". therefore (as far as i'm concerned), as a morally active principle, the increase of freedom, usually requires limits to be more and more well-defined, not fewer and less so.

when you get passed the unnecessary neo-Liberal facade, the gameplay is enjoyable

i guess that, when directed back at the game, this virtue ethics approach equates to something like the argument that the pretence that you are "free" because you can/need to carve near-endlessly around and down various mountains looking for stuff to do is a stupid and boring one, and what would be better is if the opportunities to experience the fun stuff - the mad-skilled, precision tricks, the epic drops and big airs (as promised up-front) and the adrenaline building timed runs - were greater and nearer between.

all of this having been said, when you get passed the unnecessary neo-Liberal facade, and hit an area of the game relatively well populated by events, the gameplay is enjoyable and the game delivers on much of the promise of the original.

one particularly pleasing innovation comes in the form of a dynamic weather system which not only controls general changes in the weather and thus the most basic of variables, like visibility or how much snow ends up on your character when you buckle, but also effects meta-variables like snow levels on the mountain, changing the nature of the runs and open up/closing off various possibilities in a way that demands a strategic response.

despite this nice mechanic - which essentially remains a background factor - the spectre, the lingering question is whether it's really dynamic, distinct and up-to-date enough to offer any real value to someone who already owns StokEd, or could obtain it fairly cheaply. this issue is compounded by the fact that, given the release chronology, it's not likely to be too long before a new snowboarding title will emerge from somewhere, if not Bongfish themselves.

in reality it doesn't offer a great deal of novelty.

Big Air Edition both feels and seems to function a bit like add-on content rather than a stand alone release. it points promisingly to the future and provides some new challenges and experiences to fans of the original, but in reality it doesn't offer a great deal of novelty.

if you love the series, or snowboarding games in general so much that you simply can't bring yourself to hold out for a properly new release, then go ahead, but my advice to most people would be rent and wait.

You can support by buying StokEd Big Air Edition