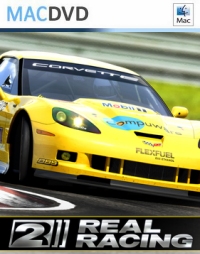 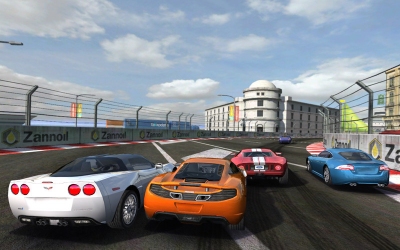 being a Mac game and coming as it did towards the beginning of Christmas week, the release of Real Racing 2 for OS X might have passed somewhat under the radar of many gamers.

however, i'm so convinced of its significance that i singled it out as one of the most important game releases of 2011.

despite the vastly increased potential for gaming on the Intel-era Macs, as opposed to their now long-forgotten PowerPC ancestors, the world of OS X gaming is (like the wider world of Mac ownership) still a rather niche, understated affair. that, however, might just be about to change.

i have one word for you: halo; and i don't mean Halo the game (that was last time).

it's fairly well established that despite controlling such a small share of the computer market, Apple benefits hugely from the fact that people who buy the more common Apple products (iPods, iPhones, etc.) often develop a desire for more products from the Apple 'family'.

this phenomenon has become known as the halo effect, and gaming is its latest (and may well prove its greatest) horizon of impact. Real Racing 2 is a perfect demonstration of why.

if you bought Real Racing 2 for iOS then you will already know how good it is. shockingly impressive graphics, super-smooth animation and a sturdy, well poised control mechanic that ingeniously utilises the iPhone's inbuilt accelerometer have made it a big hit (so much so that it played a key role in EA's acquisition of the developer, Firemint, in May 2011).

if, however, you happen to have bought Real Racing for iPad and you own an Apple TV (a combination which is admittedly fairly unlikely, given the latter's poor take-up), then you will already be aware of the ace up its sleeve. played on the tablet, it's much akin to the experience on the iPhone; but, when used in conjunction with Apple TV, it's possible for your telly to become the screen while your iPad functions as the controller.

it is this small but potent concept that Real Racing 2 for Mac brings to a considerably wider audience - i.e. those that have a Mac and an iPhone or iPod Touch.

you load up the app on your Mac, point the browser of your iDevice at an address that pairs the two (when they're connected to the same network), and boom, a piece of multifunctional technology that you already own just became a brilliant tilt-&-turn, touch-screen controller for your game.

if you do not own an Apple touch-screen device, then stay well clear.

the implementation is excellent. "ah", you might say, "but i thought the reviews on the Mac App Store were a bit average?". indeed, but look a little closer and you will see the impact there of people who couldn't stop their iDevice from changing orientation (presumably because they were wildly flailing it about and around), or who are complaining about the auto screen lock kicking in (which suggests not only that they were using 100% auto braking - and so never touching the screen - but also that they have yet to find the simple menu toggle which prevents screen lock from engaging). in other words, these reviews were written by morons.

in reality, i found the whole process to be not only utterly straightforward, but also extremely pleasing - and that was before i even started a race and found out how well it works and how natural it feels.

i should at this point note that if you do not own an Apple touch-screen device, then you should stay well clear. once i'd stopped phoning people to tell them how much fun it was and hijacking the attention of every neighbour that dropped in with a Christmas card, i tried a few laps controlling things with first the keyboard, then my trackpad, then a mouse and found all of these to be akin to hitting myself in the head and eyes with something pointy.

if you've got the necessary kit, however, in addition to its fantastic control setup, you will find Real Racing 2 also offers a decent amount of depth. of course, it's not going to come off that well in a head-to-head with Dirt 3 or Forza 4; but its fifteen circuits, thirty licensed cars, well implemented, competitive AI and fairly engaging Career Mode add enough satisfying thickness to the experience to quash any cries of "gimmick".

plus - and this must not be underestimated - while admittedly it does require some expensive hardware, not only is that hardware multifunctional, the app itself costs a fraction of a console release (currently GBP4).

it's not a flawless experience by any means: the impact mechanic, for example, is hardly a triumph - basically something hits your car and then a while later a bit of it falls off. the 'basic' nature of these interactions is largely mitigated by selecting an 'in-car' view, which i find more challenging and exciting anyway.

a glimpse of what could easily lie ahead in terms of two-screen gaming.

likewise, while i was very taken with the iDevice controller thing, it does necessitate auto-accelerate, with the tilt-to-accelerate option from the iOS version missing here. that having been said, the opposite is true at the other end of the rev counter, with the scheme performing considerably more effectively the less you rely on auto-braking.

despite my protestations, in all honesty, the reason this article exists is unavoidably the control integration. with Wii U poised for release in the second half of this year, we're still several months from seeing how Nintendo implements next-gen two-screen gaming. what Real Racing 2 brings to the Mac, however, is not only a slickly implemented accelerometer-based control scheme, but also a glimpse of what could easily lie ahead in terms of two-screen gaming on an existing, if currently marginal, gaming platform.

iOS gaming has already proven itself to be a serious facet of the gaming landscape, and given what Apple has achieved when it comes to music, when combined with its well-established and far-reaching App Store infrastructure, smart ways of integrating iOS and Mac content like this should certainly have the mainstream console manufacturers looking nervously over their shoulders.

You can support by buying Real Racing 2