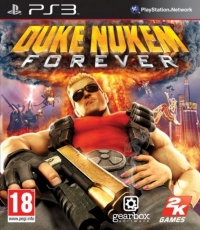 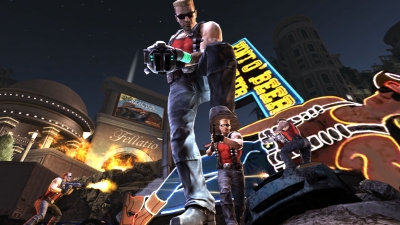 well, weld, whelm. what on earth, dear game fan, can i say about Duke Nukem Forever?

i'm definitely certainly not the first reviewer to ponder this question - especially since the guy in charge of PR for the game responded to the slew of negativity that generally constituted the immediate reaction of the mainstream gaming press by suggesting that those most critical should not receive pre-release promos in the future.

luckily for you, i'm a reviewer of no influence writing copy of no consequence, so i feel precisely no pressure not to say that in my opinion, Duke Nukem Forever is a shoddy, offensive, unceasingly moronic and above all depressing sequel to a mediocre game that somehow gained cult status for no real reason.

most reviews have majored on the fact that although it's taken twelve years to make, it's not actually at all good. they've focused on how dated the graphics look, how sloppy and unresponsive the controls feel, how the shooting sections are unrealistic and unsatisfying, how boring the long, interim sections of swimming, climbing, walking and physics puzzle solving get, and generally what an un-engaging experience it is watching and moving your thumbs in time to this sorry excuse for a game.

i, however, can't be bothered to mention any of that. and neither do i have to.

the game's weaknesses are so obvious that charting and complaining about them really gets us next to nowhere (West Nowhere). if they had to face these accusations in court, the makers of Duke Nukem Forever would not, much like an octopus filming itself forming a heptagon with its limbs, have a leg to stand on. the faults are so blatant that we can only conclude that they are as aware of them as anyone - but how can that be?

well, the fact is that they have a secret weapon.

once upon a time, very few people cared about irony. then, at some point, it became what British people mocked Americans for not understanding (in an attempt to make ourselves feel better about losing our largely overinflated cultural and political influence in the world). as a result, Americans all went away and secretly practised it, along with soccer. unfortunately, this exercise was largely unsuccessful, as exemplified by Alanis Morissette's 1996 single, Ironic, which both was and wasn't, in quite a special way.

Duke Nukem Forever is SUPPOSED to be terrible.

had Alanis released that same song ten years later, however, not only might she have been able to pass the song off as knowingly 'self-aware', but she could probably have also blacked-up for the video. i mean, not quite, but almost.

you see, somewhere in the interim period between Jagged Little Pill and, say, Little Britain, irony took on a new and much more popular function as a byword for revisiting things that most people decided, at various points in the second half of the twentieth century, were unacceptable. i, for example, have recently started a weekly, ironic, bear-dancing club - and i imagine most of you have done something similar.

right-wing, bigoted simpletons, in particular, love new-irony (or nurony), because it means that they can do and say all the same things that they got berated for doing/saying in the 80s/90s, but now people assume that they're knowingly using irony for the purpose of humour. Roy Chubby Brown, Bernhard Manning and Jim Davidson owed the resurrection of their careers in the early 21st Century to nurony, likewise the re-emergence of beauty pageants, mainstream exploitation cinema, lap and/or pole dancing and the verb 'pimp'.

it is the failure to recognise all the nurony when they saw it that caused all the uptight reviewers not to realise that Duke Nukem Forever is SUPPOSED to be terrible. for example, it's supposed to look and play really shonkily, 'cause that reminds us all of the 90s when games looked and played really shonkily, like Doom and Duke Nukem. it's a joke - see?

but that's not where the nurony stops, oh no, Duke Nukem Forever is chocked so full of the stuff that it spills out everywhere, like so many soup cartons and used sanitary towels escaping bin bags shredded by a skinny urban fox.

as a trained expert in nurony, i spotted it from the word go. the first clue is achingly obvious: dook, which is how Americans pronounce 'Duke', means shit - now that's funny before you even open the box (well, it is as long as you didn't pay for the game).

don't judge Duke Nukem Forever by the same standards that you would judge other games.

then, there's the opening sequence of the game. you initially find yourself standing at a urinal, and being prompted to press a button to piss into it (or rather to have Duke do so). this is a master-stroke, because it is at the precise moment that you begin to help Duke to piss away his poorly rendered waste fluids that he begins to help you to piss away your time and possibly even your humanity. you see? nurony. this shit got 'meta'.

as you continue through this brief opening segment, you emerge into an American football arena that is being terrorised by a cycloptic member of the (re)invading alien hordes. you fight said one-eyed marauder, and only after defeating it, realise that even though it was, it wasn't actually you playing Duke Nukem Forever, but Duke Nukem playing Duke Nukem Forever (as well as playing you, as discussed above).

Duke Nukem - the real Duke Nukem, not the one from the game - is himself playing the game, in the game. not only that, but at the same time as he's playing the game, he's being felated by identical twins (the Holsom twins to be precise - see what they did there?). although the actual act is happening off-screen, the groaning then spluttering sound effects and subsequent appearance of the girls from 'screen bottom' more than admirably fill in the gaps.

this is just one incident (from hundreds) which might ordinary cause you to think badly of the game makers - to perceive them as poor-quality people; puerile, repugnant and adolescent-minded misogynists. but then, after the 'luckiest' of his pop-starlet friends has wiped her mouth and extended him an open invitation for more of the same at a later convenience, she asks him whether his game was good. his reply demonstrates that none of this is actually sordid or serious, but merely an exercise in intense nurony. "Yeah", he replies, "but after twelve fucking years it should be."

so, first we were Duke, pissing. then Duke was us, fighting. and now Duke is both himself and us laughing at himself (and us). you see - how can something this deep possibly be grossly and persistently offensive to anyone with even a shred of dignity and MEAN it?

so there we have it, don't judge Duke Nukem Forever by the same standards that you would judge other games, because regardless of how much it seems at various times to be actually trying really hard to be good but failing, it's actually not trying. what's it's actually and always being is a big nuronic joke at its own expense.

now you don't have to feel bad about all the sexism because we're all in on the joke..

now you don't have to feel bad about all the sexism and lurid, retrogressive stereotyping, because we're all in on the joke. we all know that its not acceptable, even in a game, but because we all know that, we are all liberated to enjoy it all the more. phwwwoooar, while you're down there, love.

so. i hope that puts your mind at ease. Duke Nukem Forever is not a totally offensive, unpleasant boorish and meaningless waste of time and money, its actually one big, long, expensive, needless and utterly humourless nuronic joke. haaahaahaaahaaaaaahahhaha.

just incase, after reading this, or any review, you're still a little confused about exactly how nurony works, or whether it might actually be worth picking up a copy of the game anyway, i think i'll finish by quoting what i think is the most profound, moving and in this context surprisingly apt lines delivered by Duke in the game.

"What sort of sick motherfucker picks up wet faeces?"

You can support by buying Duke Nukem Forever