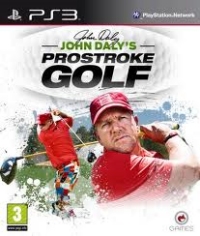 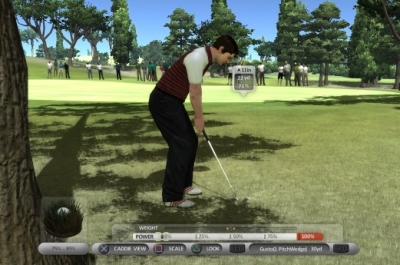 John Daly's Prostroke Golf PS3 is one of the most interesting, post-modern and dryly comic games i've played in years. even if you have no knowledge of or interest in golf, if you're a fan of fun, you'll definitely want to both read up on Daly and buy this game.

John Daly used to be known as the bad-boy of golf. he earned the (not always that good-humoured) nickname "Wild Thing" as a result of numerous blow-ups, walk offs and general examples of "poor form" on the course, as well as severe problems with alcoholism and a crippling gambling problem off it. he also used to wear quite garish trousers, which, at the time, really put some conservative noses out of joint on tour, let me tell you.

back in the day, even if you were on the large side for an athlete, didn't win that many tournaments and drank so much that when you played your hands shook to the extent that it embarrassed the commentators, as long as you wore harlequin's trousers and could hit the ball 330 yards, you were OK.

in today's world, however, being acrimoniously divorced three times, carrying charges for throwing one wife against a wall and having been publicly attacked with a steak-knife by another, is no longer enough to make a golfer the happy subject of intrigue. and all because Tiger Woods bumped his car into a fire hydrant and had an affair (although not necessarily in that order).

more problems for Daly derive from the fact that everyone hits the ball a mile and a half nowadays and lots of players wear 'fun' gear -- Jespar Parnevik, Rory McIlroy, Darren Clarke, Ian Poulter and several others are known to sport 'jive' attire -- the key difference being that most of them also shoot low scores and win tournaments.

Coinciding with the release of Playstation Move and a pause in the Tiger Woods series, Daly has launched his coup at the perfect moment.

what is more, problems compounded for Daly off tour during the early part of this decade - with Iggy Pop, Alice Cooper, Marilyn Manson and Terry Wogan all bringing their love of golf out into the open and helping to make the game the new punk pastime. Daly, therefore, became wedged between the low performing end of the pro-game on the one hand, and the no-longer-edgy-enough end of the general golf scene on the other. the only way out was to lose a tonne of weight, give up the booze and hit back. Daly went clean -- or so it seemed.

it turns out that all the gastric-banded, diet coke fuelled mediocre golf and clean living was just a ruse -- a hoax, designed to get him into a position to pull the ultimate prank.

John Daly's Prostroke Golf on the PS3 might seem like a rather pitiful product, spawn of a desperate near washed-up golfer and greedy marketeers who think his past means he still has an exploitable 'brand identity', but it's so much more than that. biding his time to coincide with the release of Playstation Move (like the Wii, a massively golf-friendly technology) and a pause in the Tiger Woods series, Daly has launched his coup at the perfect moment.

despite the fact that from the outside it looks just like a game, John Daly's Prostroke Golf is in fact actually a brilliant practical joke (ed: ah I see, your mocking him aren't you). i have to admit, i wasn't really that up for it when it first arrived -- it seemed like it might be mediocre. within seconds of loading it up and hitting the first tee, however, my fears were assuaged -- it is most certainly not mediocre.

I could muck around in way that masked my profound, inner dissatisfactions

despite a few seconds of utter confusion, it suddenly dawned on me -- and once i got the joke, i began to chuckle my way through the hole, the back nine and eventually the whole course. the attention to detail that has gone into getting the experience just right is really impressive. it's not only that the aiming mechanic is unintuitive and fiddly, but that it's so awkward and imprecise that not only do you realise that you're not meant to be able to aim accurately, you begin to relish the experience.

with stunning accuracy and heaps of wit, John Daly's Prostroke Golf transports players back to the mid-nineties. the unbelievably ugly, blocky visuals, the clunky, indistinct sound, the wildly unpredictable swing mechanic, the lack of detail in the courses that basically means that each blurs into the next -- every aspect of Daly's frenzied nineties is impressively rendered. by the time i reached the third tee, i actually felt drunk and like i could muck around in a way that masked my profound, inner dissatisfactions -- catching myself feeling like this only added to the joy of the experience as i felt unable to take my own deeper emotions seriously, and began to chuckle my way through a third tee-off shot.

so far i'd scored a 3 over par 7 and (somehow) a birdie 3, but frankly that didn't matter one jot. one of the truly great things about John Daly's Prostroke Golf is that it manages to make the golf such an unimportant part of what's going on.

although describing the experience is almost beside the point, there really is a subtle kind of genius at work in producing an aiming scheme that makes it both ridiculously jerky and difficult to position the marker where you want to aim, but then also really easy to dislodge it from that position by a massive amount when you don't mean to. when it comes to the all important swing, the details are just right there too. the swing mechanic combines a detailed knowledge of exactly what makes for poor technique -- forcing the player look at the screen throughout to try to control the wildly inaccurate power gauge (and hence not allow her to swing with her head down, as she should), with a precise knowledge of exactly what has been proven to fail in previous generations of golf games (like that kind of power gauge).

Deliberately hitting balls into the water for fun.

in addition to the dizzyingly terrible and superbly judged graphics, sound and aiming, club selection and swing mechanics, John Daly's Prostroke Golf boasts perfectly pitched and superbly bland 'packaging' -- with the menus and options and so on all sporting unbelievably drab styling of the sort that the Wild Thing must have perceived everywhere he went in the scotch-soaked nineties.

the game plays so badly, that without realising it you will soon start to ape Daly's behaviour in almost every way -- deliberately hitting balls into the water for fun, quitting mid-tournament, generally not taking the golf even the slightest bit seriously: all things Daly became notorious for. John Daly's Prostroke Golf is such a truly immersive experience that by the end of my first, gruelling, 121 shot round, i was looking for a loved one to come at me with a blade, or for someone vulnerable that i could allegedly attack.

it's not often in the computer game world that experiences of this nature have been attempted, and certainly never with the level of detail that John Daly's Prostroke Golf brings to the party. for someone who was by all accounts just pretty much fading away into insignificance, Daly has really overturned the clubhouse tables by sending himself up and putting his name to a work of true satirical genius.

It will probably be a one-off.

if you're looking for a boring, aesthetically pleasing, accurate and rewarding golf game that brings the latest in motion technology to life, then wait for Tiger Woods 11. if, however, you're not that bothered about the golf, but have a good sense of humour and want to experience the world's first truly post-modern sports game/alcoholism sim, then John Daly's Prostroke Golf is for you. i'd say it will probably be a one-off, but what a one-off!

You can support by buying John Daly's Prostroke Golf