Other GamePeople columnists have reviewed this from their perspective - huh?:
Tech Gamer (Wii)
Reporting Gamer (Wii) 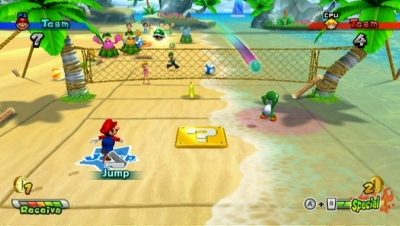 i have a mixed history with Mario-themed sports games. as far as i'm concerned, Mario Tennis on the N64 and Mario Kart 64 are two of the great multi-player games of my lifetime. my friends and i sank so many of the hours that made up our first year at university into them and Perfect Dark that i'm ashamed to think of it. (aside: i'm not really, really i'm proud and nostalgic to think of it).

in more recent times, i've been a fairly big fan of the Gamecube and Wii Mario Kart outings and Mario and Sonic at the Olympic Games and Mario Strikers Charged on the Wii. there is, however, a darker side to the magic plumber's sporting exploits.

Mario Golf on the N64, for example, was a model of how not to make a novelty golf game (no John Daly's ProStroke to guide them back then), and was only moderately improved in its Gamecube sequel. then there was Mario and Sonic's ill-fated trip to the Winter Olympic Games and Mario's two swings at baseball glory (zzzzzzz).

with the latest edition to the fold, Mario Sports Mix, however, there's a departure from the straight-Mario games' tendency to focus on one sport, in the direction of more of a Mario & Sonic or Wii-Sports type compendium (hmmm, wonder why that might be? *cough, biggest selling game ever, cough*)

so this time out we get four sports for our money, with basketball, dodgeball, hockey (by which they mean ice (or more often roller) hockey) and volleyball. all the usual stuff that established Mario spin-off fans have come to expect are there: ultra-bright colours, chaotic explosions, weapons, special manoeuvres and unlockable characters from Dragon Quest and Final Fantasy. wait... what?

yes, that's right folks, as a consequence of this game having been handed over to Square Enix, the unlockable characters are not old friends from Mushroom Kingdom or other reaches of the ever-expanding Mario universe, but incongruous interlopers like the stupid walking cactus from Final Fantasy or the slime monster from Dragon Quest. it's like when Dr Who turned up in season three of The Wire (or was that a dream?)

normal playing of the game becomes very much a secondary goal behind survival and not developing epilepsy.

the big question i guess is whether four sports rather than one means a compromise in quality, and the answer is 'yes, perhaps, but'. the nature and feel of the four games is suitably diverse that they will each appeal to some people and not others, in various combinations.

i felt, for example, that dodgeball was by some margin the weakest inclusion, and volleyball probably the strongest, with the other two flitting about somewhere in between.

as is always the case, where you play makes almost as significant an impact as what you play, given that some of the stages are so full of interactive background elements or have such prominent features that the normal playing of the game becomes very much a secondary goal behind survival and not developing epilepsy from all the bonkers happenings on screen.

there are some nice features thrown in, but attention to detail is patchy in some of the games. volleyball, for example 'feels' quite realistically sporty, whereas hockey loses its way in some instances - ramming the puck passed three traffic cones is in no-way the same as shooting passed a real net-tender (even if the Shy Guys who usually play in this position are embarrassingly/frustratingly terrible).

basically, the volleyball plays quite a bit like the Mario Tennis games; the hockey plays quite a bit like Mario Strikers Charged (except for the aforementioned lameness of the goalies), the basketball is an expanded and fleshed out version of Mario Slam and the closest thing to the dodgeball experience is probably Super Smash Bros.

the apparent need to Marioize everything can start to feel a little strained.

many of the elements that you'll expect to find included like character-specific special abilities work well - two of my favourites being Yoshi's spinning tongue defence in basketball and Waluigi's multi-robo-armed backpack attack in dodgeball. occasionally, however, the apparent need to Marioize everything can start to feel a little strained, like the requirement to collect coins for powerups, for example.

the one-player options are a bit ropey, particularly given that the AI is frustratingly set at a patronisingly easy level. one major hassle comes courtesy of the fact that you are forced to unlock the hidden content for each sport - i.e. every level, character and colour must be unlocked four separate times.

what Mario Sports Mix is all about, however, is the multiplayer, and while the offline options are as strong as ever, you also get a really decent WiFi integration which enables some awesome 2-on-2 online action.

the graphics, animation and gameplay are largely up to the high standards i expect from a mario spin-off with particularly slick controls noticeable in volleyball and basketball. the sound, however, is something of a letdown, with several annoying and un-mario like tracks making the final music roster and quite a lot of sound effect overload in the more frantic moments.

i don't imagine it's set to steal Wii-Sports' crown.

all in all, i don't imagine it's set to steal Wii-Sports' crown or for Mario immortality, but it's certainly not a poor effort. aside from a few poor choices (like the Square Enix characters, weak AI ability and the fact you have to unlock all the hidden content four time over) things have worked out pretty well.

whether its watching bowser pulls off some epic rock-jams or teaming up for some awesome alley-oop action on the b-ball court, getting stupid-rough and all up in Toad's grill on the ice (or tarmac), spiking the ball right into your opponent's big ol' face on the volleyball court, or swerving a sneaky one to your team's undercover Yoshi to take down a dodgeball grudge match, there's definitely a whole lot of fun to had.

You can support by buying Mario Sports Mix