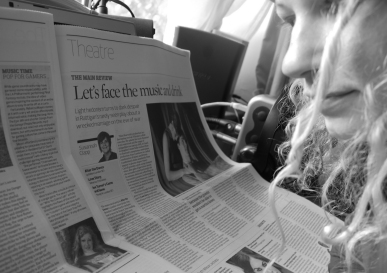 Secretly I have discovered that Rebecca Mayes has hit the national UK papers. A text from a friend: Nice review in the Guardian. An email from my brother: Congrats on the piece in the Independent. It's all news to me. Seems I need to set up google alerts on my own name. How disturbingly narcissistic.

I also have no idea if I was in actual print or just online, and it's not as easy as going to your newsagents and asking for yesterday's paper - no they all get sent back to the aliens in the sky, seeing as the past is prone to going out of sell-by-date.

And so I settle down in front of the screen to see what the big guns have to say. It is more than odd reading about yourself in this way. I have come to think of Rebecca Mayes as an entity beyond my knowing, a project, an experiment. I am not her/it. I am the experience of reading her story, created by me, created by strangers.

This is what Toby Moses had to say in The Observer:

[Interesting use of ‘voice' here, Rebecca Mayes thinks, both the sound of her voice and the thoughts she gives voice to. Humm this guy is a pro.]

Well, Toby Moses has made it into Rebecca Mayes' good books that's for sure.

And now she's off to search the aliens in the sky, see if they'll send back a copy of the past.

You can support Rebecca by buying Big Guns