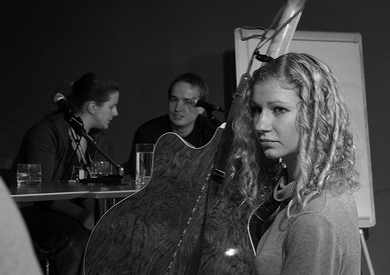 Hello gamers, yesterday I headed up to Nottingham to be part of Gamecity, my first ever gaming festival. I had no idea what to expect. I was full of excitement, even though I discovered on the morning of the gig that my guitar wasn't working (something wrong with the pick-up for the guitar nerds among you).

Undeterred, on arrival to Nottingham I went on a strange adventure to get my guitar fixed in time for the gig, which included two very friendly guitar shops (neither of which could help me), a seventeen year old chauffeuring me around nottingham (a total stranger who didn't want petrol money), two female transsexuals and a soldering iron. Needless to say with all this goodwill the show went on. Sadly my guitar didn't (I need a new pre-amp board - for the guitar nerds).

That's not the right ending to the story I hear you say. But by some stroke of love another total stranger lent me his guitar and I was able to play my first ever Rebecca Mayes Muses gig. It's the first time I've played and people have laughed mid-song. It was a surprise. What a friendly and supportive audience. There is a lot of love in the gaming world. I did a special version of Overlord II and yes there was screaming. From me that is.

Other highlights from the festival included watching people snake around on their bellies, get shot and generally make fools of themselves in Crysis live; playing with adorable lego men; and, well, eating pizza.

Till next time amigos xx

You can support Rebecca by buying GameCity Live Performance