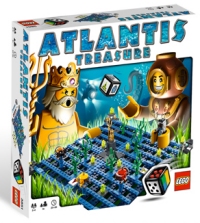 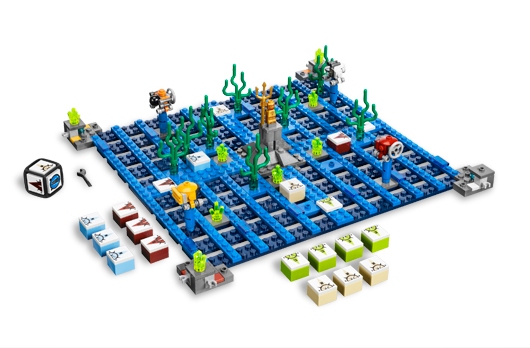 Lego Atlantis Treasure is a new game in the Lego collection. These are board games that you build, play, and change. Atlantis Treasure offers more of a challenge than other games in the series and probably suits slightly older children of around nine years and over.

Lego Atlantis Treasure is one of the more complex games in the Lego series. Because of this it takes a little longer to build and is quite fiddly to construct. But the extra effort results in a more engaging game for slightly older players.

Like the other games in the Lego Games series, Atlantis Treasure comes in pieces, ready to build. We set our nine year old the task of building the game from the instructions and came back 30 minutes later to find it all setup.

Lego Atlantis Treasure tasks the players with navigating their own submarines through the an underwater maze to find sunken treasure. Unlike Shave the Sheep, Atlantis Treasure offers the players a much more skill oriented challenge. You need to decide how and when to move as well as firing at obstacles in your path, or blocking other explorers.

The game uses the now familiar customisable Lego dice, but adds to this a range of Lego counters that are used during play. The game supports up to four players and took us around 40 minutes to complete - a little longer than the 30 minutes states on the box, maybe because we have slightly younger children.

Because of the complexity here, it is a little more difficult to customise the game play. But it does come with instructions for a couple of variants and seemed to inspire a whole resurgence of Atlantis themed Lego constructions from our kids.

Atlantis Treasure is strong addition to the Lego games range, particularly if you want a more involved experience.

You can support Ed by buying Lego Atlantis Treasure