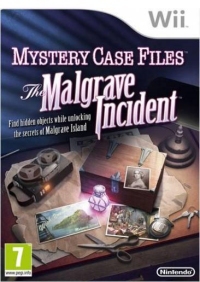 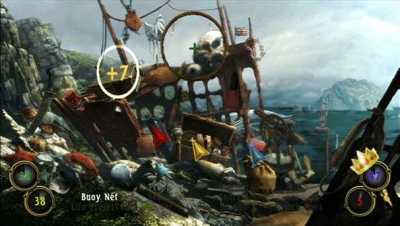 Mystery Case Files: The Malgrave Incident tickled our board game itch with an electronic hidden object adventure. The pacing and steady turn taking made it feel familiar while the interaction and sheer volume of content reminded us this was another step into the brace new world of video games.

At its heart, Mystery Case Files: The Malgrave Incident is a typical point and click adventure game -- progress the story to the end to solve the mystery -- but with a twist: contained within are hidden object mini-games.

Now, our favourite games are highly thematic, a bit "thinky" and nonviolent; in an adventure game, players can never make irreparable moves, their character cannot die. As for hidden object games Ultimate I-Spy was a former family favourite. So this game seemed to be ideal for our family.

In adventure mode (the game also features a competitive hidden object race mode), you play cooperatively in the role of detective hired by Malgrave, whom you do not meet but communicate with in a series of triggered messages via the Wii-mote (think of the listening guide device one is given in a museum nowadays).

You are charged with searching his abandoned island resort, which has fallen into some disrepair, to collect the "dust" with mysterious powers and the only hope of saving Malgrave's beloved Sara. However, while searching you cannot help but fall into adventures (as the Famous Five would say). You are soon asking yourself under what circumstances did this once-beautiful island come to be apparently abandoned and is there in fact someone still living here?

The scenes are essentially 2D, in which the camera can be panned about 20 degrees (both vertically and horizontally). Notably there are no humans or animals depicted, other than in paintings and the like. Moving to another part of a scene is sometimes a smooth scroll but more often simply fades to a new scene.

However, the fact the backgrounds are beautifully drawn, second only to Another Code in our family's experience, means one scene flows nicely into the next. It also gives the game almost tranquil simplicity, which is a boon in our book.

The learning curve is very gentle and requires not even a cursory glance at the manual. As is usual with the Wii, the first few scenes act as the tutorial and the instruction are unobtrusive. After the first session, all players had mastered the navigational controls and screen layout.

Overall the scenes are very atmospheric, especially the background music, of an island abandoned under mysterious circumstances. A little too atmospheric, perhaps because seven-year-old Iona soon abandoned the game for good, saying she found it "too creepy." Although it was the graveyard scene (daylight and not even a hint of anything ghostly) that final tipped her over the edge, it seems she had been uncomfortable for a while.

Hovering over an item of interest turns the caret to a magnifying glass icon and clicking will reveal the clue. Most often this describes the item in the form of a question. Perhaps the style is meant to be though-provoking -- we are detectives and need to invoke our powers of deduction -- but after a while it caused us to feel paranoid. How exactly did this island come to be abandoned? Whether intentional or otherwise, the underlying dark tones add to the experiences, though perhaps only to be appreciated by the grownups.

The learning curve is very gentle and requires not even a cursory glance at the manual -- quite unlike most board games we play. As is usual with the Wii, the first few scenes act as the tutorial and the instruction are unobtrusive. After the first session, all players had mastered the navigational controls and screen layout.

In order to progress the story players must collect items, perhaps modify them, then use them in the correct location. Each area on the island has numerous dust locations, visually identified by its pink sparkle, and clicking on it invokes the hidden object mini-game. These games-within-a-game are a lot of fun, so much so we have to take it in turns to be "in control". They are pleasantly challenging: some obvious, some fiendishly hard to spot. There is a neat hints system built in, which ten-year-old Aurora can be overly-eager to use but is a nice feature that help keep the game moving along.

Each hidden object mini-game provides one inventory item. Other items are found directly in the scenes, usually requiring the invocation of an animated sequence in the otherwise static environs. For example, an object in the bucket of a well can only be retrieved once a belt has been attached to a motor and the 'on' button has been pressed. It is usually clear which item needs to be used where: the text suggests using something that will "whip" us across a void and later we find a whip, that kind of thing.

Clues that are a key part of the story are automatically written into the casebook. This is essential to solving the frequently-encountered puzzles, required to literally unlock important clues in the game. In general the puzzles are non-trivial and don't really fit the theme. If Malgrave is keen for us to collect his precious dust, why did he does make us solve jigsaw puzzles before we can deposit it into his machines? Although vaguely interesting diversion, we had no qualms in consulting an online walkthrough for solutions to the harder puzzles.

Mystery Case Files: The Malgrave Incident was our most eagerly anticipated game to date and largely stood up to our high expectations. It is a shame that Iona opted out, something I hadn't expected because for me the game is not overtly scary. For the older members of the family, it is now a firm favourite. We are guilty of having four adventure games in progress at the moment and I fully expect that Mystery Case Files: The Malgrave Incident will be the first to be completed.

You can support Ed by buying Mystery Case Files: The Malgrave Incident