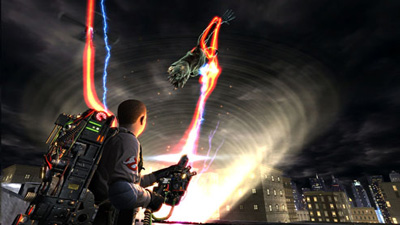 The much beloved Ghostbusters from the successful and popular 1980's movies finally get their next-gen videogame adaption in Ghostbusters: The Video Game for the Xbox 360 and PS3. This Hollywood-quality storyline acts in many ways as a sequel to Ghostbusters 2 and puts you control of the new Ghostbuster, following the famous faces and voices of the original cast as you bust ghosts all over New York again. With impressive graphics and a hilarious script this is a perfect tribute to one of the greatest films of all-time.

Set in 1991, the game picks up two years after the events in Ghostbusters 2 and plunges you straight into the action alongside the famous cast of the original films. Its here you realise how beautifully shot and voiced this game is and it succeeds in sucking you into the world of the films with consummate ease.

Playing as a new recruit gives the game a good excuse for letting the main cast run amok with witty one-liners and interact with each other just like you were watching a film. Seeing Dan Akroyd, Harold Ramis and Bill Murray chewing up the virtual scenery is worth the price of admission alone and the standard of writing and voice-acting sets a new standard that other games will work hard to compete with.

As for the actual gameplay it's a matter of tracking down errant ghosts and weakening them with your proton pack and PKE meter until you can capture them as per usual in the Ghostbuster films. It takes a bit of getting used to but once you nail down the shooting mechanics, the process of capturing these ghouls it gets easier every time. As you’re the experimental weapons specialist you'll get to try out a variety of new equipment that will upgrade or change the basic proton beam weapon - sometimes with entertaining results. The slime pack is a great example as it blasts enemies with gooey ectoplasm but can also act as a tether by stringing up opponents by using the sticky rope of slime that secondary fire shoots out.

Though you might think this basic type of gameplay might get a bit boring, it's given a huge boost by the enemies you battle and the locations you find yourself in. Characters and ghosts from both films make returns and battling the Stay-Puft Marshmallow Man is an epic experience that gives Ghostbusters one of many jaw-dropping moments.

Perhaps a little surprising is the addition of multiplayer to the game. Away from the single-player experience, the option to join three of your friends in some co-op mission shows that the mechanics of game stand up away from the narrative. There's a co-op campaign that strings together a bunch of missions - like defending a piece of equipment or trapping as many ghosts within a certain time limit. Blowing stuff up with a group of buddies was an excellent bonus to this game and playing as a full group of Ghostbusters made the combat all the more sweeter.

So the combat might be satisfying enough but what I found to be more enjoyable and what the game did best was revelling in its fan-service. I'm a big Ghostbusters fan and the nice touches throughout each level, whether it was revisiting some major scene from the films or encountering a major character or ghost made this experience sweeter. In-between levels I also found you could walk around the Ghostbusters firehouse headquarters. This is chock-full of lots of little nods towards the films in the form of little trinkets or larger items like the talkative painting of Vigo the Carpathian from Ghostbusters 2.

Its touches like this that makes Ghostbusters: The Video Game such an essential game to play if you're a fan of the films. The presentation and combat is good enough, but the voice acting, one-liners and exhaustive fan-service make the game so much more than the sum of its parts. Playing this game is more like taking part in the third Ghostbusters film and with the cast of the original films along for the ride; it makes for a very enjoyable videogaming experience.

You can support Jan by buying Ghostbusters: The Video Game