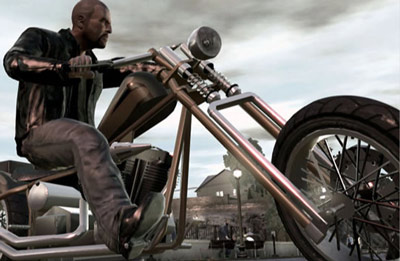 Expanding the world of Grand Theft Auto 4 comes this standalone version which contains two new stories that take place in Liberty City. The Lost and the Damned follows Johnny Klebitz, the VP of 'The Lost' biker gang as he struggles to control the gang's sociopathic President, his brother Billy. Back from rehab Billy soon destroys all of Johnny work to maintain the peace between rival gangs and it soon becomes a bloody battle between cops, rivals and a feud between brothers.

The Ballad of Gay Tony tells the story of Luis Lopez, a part-time thug and full-time employee of the legendary nightclub owner Tony Price (Gay Tony). This story injects some much needed glitz and glamour into the world of GTA IV whilst still offering a murky plot that has players struggling to cope with the competing loyalties of friends and family. With both stories intersecting the main plot of Grand Theft Auto 4, these exclusive Xbox 360 episodes offer a new twist on the most involving game of the generation.

Offering a local perspective on the world of Grand Theft Auto 4, 'The Lost And The Damned' gives a harder, less idealised story to experience the underworld of Liberty City. Following Johnny Klebitz as he copes with his brother's return from rehab, you quickly notice how grimy and dirty the world is compared to that of Niko Bellic. As a member of the 'The Lost' the game really conveys the in-fighting and harsh reality of being in a tough and uncompromising biker gang.

Watching as Johnny's plans come crashing down in a psychopathic blood bath is an entertaining and involving experience, but what makes it all the more interesting is how much the game has changed from GTA 4. The same mechanics are there but the graphical style has changed appropriately according to the character you're playing. Johnny is a much more of a streetwise guy and the focus on bikes makes for some pleasing combat sequences and chases.

Riding as a biker crew in 'The Lost And The Damned' is an awesome experience but what really made a difference and improved on the original Grand Theft Auto 4 is the length of the story. Here, it's told in a well-rounded eight hours and this compression of the usual, thirty hours length of the main GTA games, means the experience is much quicker. I loved how the story clipped along at a fair pace and it made the twists and turns in this violent turf war story all the more effective and impactful.

Going in the opposite direction in the Grand Theft Auto world is 'The Ballad of Gay Tony'. This adds a lot of sparkle and glamour to Liberty City as well as a fair dose of the grimy underbelly of the nightclub scene. Playing as Luis Lopez, bodyguard and friend of Tony Prince, you're committed to helping him resist the encroachment of gangsters trying to take over his turf.

Instead of concentrating purely on the down-and-out's of Liberty City, 'The Ballad of Gay Tony' indulges in some glitzy excess not seen in a Grand Theft Auto game since GTA: Vice City or GTA: San Andreas. It's all about putting back the ridiculous scenes and situations from those games, from a champagne mini-game to stealing helicopters and blowing up expensive yachts.

Most of the missions concentrate on storming through the properties of Liberty City's demented wealthy and experiencing all their eccentricities and luxurious lifestyles. With the option of using armoured personnel carrier, complete with a 50-caliber gun shows that 'The Ballad of Gay Tony' isn't scrimping on the weapon front. It's even gone so far as to equip you with a parachute that makes skydiving above Liberty City a truly breathtaking experience.

The new innovation that I found the most exciting was the change to the missions from the usual structure. In all other GTA's and 'The Lost and The Damned' you had to complete missions in a certain single way. In 'The Ballad Of Gay Tony' you'll get optional goals tagged onto the main mission - like ideal completion time, ideal damage taken or landing yourself on a certain truck. Although they give the game more of an arcadey-feel like GTA: San Andreas or Saints Row 2, they really help to add a bit more variety to the missions. Because of this, you can replay completed missions to hopefully hit these goals, just like you could do in GTA: Chinatown Wars for the DS and PSP.

Both of these episodes offer excellent value for money with their involving and different storylines that show a unique side to Liberty City not seen in the original Grand Theft Auto 4 game. It's the perfect introduction to the world of Grand Theft Auto, these episodes are slick, lean and offer two mesmeric experience that shouldn't be missed. The way they add depth to the game for seasoned GTA 4 players makes this an essential purchase, exclusively on the Xbox 360.

You can support Jan by buying Grand Theft Auto: Episodes from Liberty City