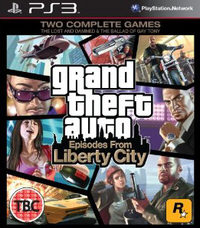 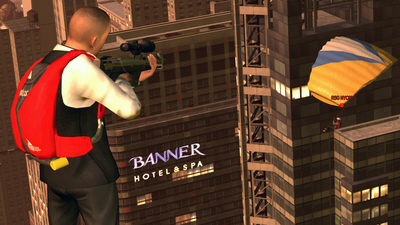 Grand Theft Auto: Episodes from Liberty City PS3 provides two different but equally compelling stories well worth returning to the metropolis for. Whether you want to dress up or dress down, you'll find great writing, tonnes of brilliant new missions and a host of returning characters to make it worth your while.

Liberty City is an incredibly rich tapestry where different stories are told - these episodes gives us two tales from very different ends of its seedy underbelly. Whilst both of them are set within the same geography, each has its own style and fresh feel even after recently playing the original.

The Lost and Damned is a story about Liberty City's biker gangs. You play Johnny and try to bring order to your chapter. Former boss, Billy who ran things fast and loose starts the game locked up and you try to turn The Lost into a profitable business even if that still involves gun running and drug deals. When Billy inevitably arrives back on the scene the tensions begin to rise resulting in an intra-gang war, which forms the basis for many of the missions.

Whilst you couldn't describe Johnny as a "good boy", Rockstar have created a character with a different moral code than Niko from GTA IV - I found him easier to like. His actions, which become your actions, seem less random and therefore easier to tolerate. This doesn't prevent the streets being littered with corpses, but here I could justify the carnage. After all, putting myself in Johnny's boots, I was just trying to do the right thing for my boys.

This is less convoluted than Niko's story, with fewer plot strands and characters it keeps focus on how to win the turf war. I could just enjoy how things had turned out, rather than trying to remember how each character had played their part in the finale.

After all, putting myself in Johnny's boots, I was just trying to do the right thing for my boys.

Ballad of Gay Tony is the other story. It sees you take on the glitzier crimes and misdemeanours as you desperately try to stop Tony from killing himself with bad drugs or poor decisions. As Louis, you are a guy from the streets trying to make a life of yourself, whilst looking out for your old friends and your momma.

The Ballad of Gay Tony is a return to Rockstar's excess. The missions are as outrageous as the armaments. Even if it destroyed credibility within the story, skydiving to a waiting boat or shooting police choppers from the top the Empire State building are undeniably entertaining.

This is driven by some great writing and situations that on several occasions had me laughing out loud. Making my getaway on a golf cart felt so crazy that I kept it for the next few missions. The fact that the characters didn't raise an eyebrow at my transport, just added to the dry humour.

Whilst huge fun, the amplification in violence feels at odds with Louis' efforts to leave these actions behind. His portrayal as a man turning his back on a shady past are contradicted by his violent reactions to most situations. Thinking about the effect on a living and breathing Liberty City also caused me some consternation, since so much has been achieved to ground the action within a version of reality.

I loved crossover moments, where you'll experience previously played missions from another perspective. Amongst these are bank robbery and the botched diamond deal that provided plenty of talking points for my wife and I as we both did our best to spot characters from the other games. If Rockstar were to build more stories within this city, celebrity watch could become our favourite meta-game.

As my wife said, "It's now much more interesting to watch"

Playing games with other people adds to my enjoyment of gaming immeasurably and Grand Theft Auto has a story good enough to keep my wife and I glued to the couch. The only issue has been my level of skill whilst playing through the missions. Some have required several attempts and there's only so many times she will watch the same cut scene before she starts drifting back to her magazine. Thankfully, the Episodes now include mission checkpoints meaning my ineptitude has less effect on the flow of the game. This not only makes it less annoying for me, but as my wife says, "It's now much more interesting to watch". About time Rockstar. "It's now much more interesting to watch".

Episodes from Liberty City has its strengths and weaknesses. But the pull of seeing events in the city from different character's eyes made up for any shortcomings. Time spent dressed-up in leathers was slightly more preferable than pacing the floors of nightclubs. But for standout moments Gay Tony is spectacular as it takes you to parts of Liberty City that you won't have seen before - and all with a smile on your face.

You can support Jon by buying Grand Theft Auto: Episodes from Liberty City