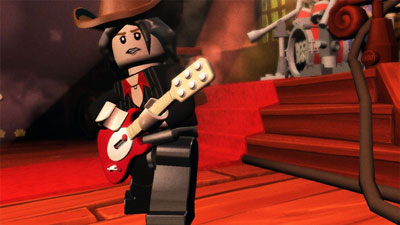 If you're looking for an easy way into the popular music rhythm game genre then Lego Rock Band is the only option to take. Featuring a totally unique Lego art style, Lego Rock Band for the Xbox 360, PS3, Nintendo Wii and DS combines the accessible nature of the Rock Band franchise with the adorable and charming Lego characters. This kid-friendly entry features the same slapstick humour the Lego video games are renowned for and coupled with the fun mechanics of playing a rhythm-action music game, Lego Rock Band is a wonderful choice for all aspiring (Lego) Rock stars.

Targeted squarely at the younger market, Lego Rock Band has such a unique style of presentation that it's hard, even for a Rock Band and Guitar Hero veteran, not to find it appealing and endearing. If anything, the way Lego Rock Band has been put together means it gives the usual music game an incredibly refreshing new coat of paint to enjoy.

From the very opening cut-scene it's apparent that the spirit of the Lego games, which faithfully re-interpreted the Star Wars and Indiana Jones series of films, is doing the same thing for the music genre. It's impossible not to be charmed by this beginning and the game slots in a few more of these cut-scenes throughout the game as you progress towards super-stardom as a nice reward.

It's these scenes that help keep the game moving as you play your way through the usual set-list structure of a Rock Band game. But what makes this ordinary gameplay a little more unusual and much more awesome is how the story encroaches onto the actual playing. These 'Rock Power Challenges' charge you with helping out your fans by the power of music and by performing certain challenges. The first instance of this has you helping a demolition crew blow up a condemned skyscraper. In a Spinal Tap-inspired moment of gameplay you use your powerful music to get the ground shaking and raze the building to the ground - What could be more Lego-based Rock than that?

Moments like this are incredibly satisfying and unique. When the action on the screen is affected by the songs you're playing, even in this overblown way, it just makes for an awesome playing experience. Lego Rock Band really stands out against other rhythm-action music games.

Getting technical, the process of playing the instruments in Lego Rock Band is exactly the same as the first Rock Band game - notes stream down from the top of the screen and you strum along to the music. You can have up to three friends taking part and a full band will consist of a singer, drummer, bassist and guitarist. Although the gameplay is no different than other games, it's still a lot of fun to play along with a group of mates or with the whole family. The visuals certainly help to give the game its unique personality and most of the songs on the play list fit perfectly with the goofy style of the game.

One aspect of Lego Rock Band I appreciated was the ability to turn off the kick pedal for the drum set. As a novice to the world of drumming I was having a hard time beating the pads to the right rhythm and trying to work the kick-pedal into this routine. This is obviously a move to enable younger or more inexperienced players get into the whole game and this helpful attitude spreads to the songs themselves. There's the option to play a shorter version of the track and this helps tremendously for keeping a shorter gaming session interesting and fresh.

The basic mechanics of Lego Rock Band for the PlayStation 3, Xbox 360, Nintendo Wii and DS may be exactly the same as the Rock Band games but there's no denying it has a unique charm of its own. With the ability to personalise your Lego rockers and create an individual Lego Rock Den, Lego Rock Band is a great buy for anyone who wants to just pick up an instrument and play. This is a perfect purchase for newcomers to the genre and has enough charm and individual character to make it essential for anyone else.

You can support Jan by buying Lego Rock Band