Other GamePeople columnists have reviewed this from their perspective - huh?:
Family Gamer (360)
Frugal Gamer (DS) 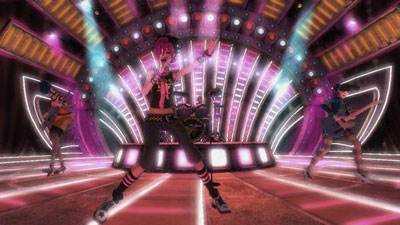 Band Hero is a casual sequel to Guitar Hero on 360, PS3, PS2 and Wii - with a tailored DS version to be released soon after. Band Hero matches the features of Guitar Hero 5 - full band setup with lead, bass guitar, drums, and vocals as well as drop-in/drop-out multiplayer. The in-song instruments and difficulty menus are retained from Guitar Hero World Tour as are the new multiplayer modes from Guitar Hero 5. The game's more family friendly mainstream packaging is matched by an enhanced drum controller that is initially exclusive to the Wii version on release.

Guitar Hero has enjoyed widespread success among hard core gamers and looks to expand its horizons further this year. Along with the new multiplayer modes of Guitar Hero World Tour and Guitar Hero 5, DJ Hero ads a record turntable into the mix. To this they bring the mainstream set-lists and stylings of Band Hero.

Band Hero for 360, PS3 and Wii boasts 65 songs from mainstream acts. These range from the classic sounds of "ABC" from the Jackson 5 to country stylings of Don McLean's "American Pie" and "Angels of the Silences" from Counting Crows. Classic 90's tracks from Culture Club, No Doubt and Poison ensure that older family members are kept happy. The kids have a fare share of sounds as well, ranging from Dashboard Confessional's "Hands Down" to "She Will Be Loved" by Maroon 5.

There are some new additions for this release as well. Many criticised the quality and construction of their Guitar Hero Drum purchase. Those buying Band Hero will be pleased to hear it includes a new drum kit controller. The same five-pad set-up continues, but attention has been paid to improve weight, size concerns and assembly. The cymbals are now more circular, and the stand now supports the bass kick pedal.

That Band Hero is first and foremost a game for the casual market is confirmed by the release date exclusivity of the new drum kit to the Wii. The 360 and PS3 version will have their hardware updated soon after release.

If you come straight from the World Tour drum-kit to play Band Hero it's immediately obvious that they have more percussive flare. Previous wrinkles have been ironed out so that it is just about you and the music. I also found the new sensitivity adjustment enabled me to get the kit to match my style and strike weight. Playing with my family also uncovered the wisdom of the song selection. The very young were happy with the Indie hits, whilst the country and electronic tracks had something to offer to a range of ages.

It's never easy to review a game that is such a personal experience. Most will celebrate the new hardware improvements, and fans will no doubt clamour to upgrade their kit. But Band Hero is a game aimed squarely at the casual and mainstream market. For them the songs and the aesthetic are the biggest draw. Even if there isn't a host of new features this shouldn't stop them joining the rhythm action fake plastic fun.

You can support Jan by buying Band Hero