Other GamePeople columnists have reviewed this from their perspective - huh?:
Family Gamer (360)
Frugal Gamer (360) 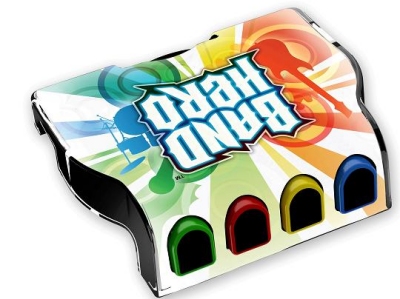 Band Hero DS is the follow-up to the peripheral led Guitar Hero On Tour that sported its very own Nintendo DS peripheral controller. Band Hero continues the theme of providing a full Guitar Hero experience on the Nintendo DS. Again it provides a Guitar Grip that plugs into the GBA slot for Guitar and Bass parts. But this time it is joined by a Drum Skin peripheral that allows players to drum on the DS buttons. Along with this, a raft of new modes and enhancements join the impressive set-list to create another strong option for rhythm action on the go.

Guitar Hero DS has enjoyed widespread success and looks to build on this with a raft of new features that take the DS experience a step closer to the 360, PS3 and Wii versions.

These enhancements are led by the return of the forth iteration of guitar and bass gameplay with the Guitar Grip peripheral. This provides players with four fret buttons that let them grip their DS as if playing guitar. Playing the new version I enjoyed a wider range of strumming styles that game more flexibility that allowed me to choose how to play each song. It also offers some specific challenges reminiscent of the hammer-on hammer-off intricacies of the console version.

Brand new for Band Hero DS is the Drum Skin. This fits nicely over the bottom half of the DS and provides four coloured pads for drumming. These trigger the DS's A/B/X/Y face buttons and although a little fiddly to execute at first, do add to the overall music making feel. Some may argue that the DS touch screen would have been a better route, however the inability to detect near-simultaneous taps would have meant a haphazard drumming experience.

While the Guitar Grip can be used with both the DS original and DS lite, the Drum Skin can only work with the DS lite. The currently smaller DSi audience means that they will have to wait for a later release until these peripherals will be updated for their use. All three models can make use of the DS microphone for vocals though, a simple move that adds a surprising amount of fun.

Band Hero DS comes with a selection of 30 songs from the console version. These range from the up and coming tones of Vampire Weekend's "A-Punk" to the classic "Crazy Little Thing Called Love" from Queen. Indie kids will appreciate "Everything About You" from Ugly Kid Joe and Blink-182's "First Date", while the cooler set should find pleasure amongst the chords of "Get Free" from the Vines and Kaiser Chiefs' "I Predict a Riot".

In isolation these elements can seem a little tacky and disparate. Play them together though and Band Hero on the Nintendo DS proves itself great entertainment when out and about or on long journeys - just avoid the quiet carriage. Here, you can team up with four other players in local multiplayer that mirrors Guitar Hero 5 and allows any combination of instruments. Get four people on a drumming or guitar contest and things really heat up. This release still lacks support for the Nintendo Wi-Fi Connection as well as downloadable content. Something for next time perhaps.

Some will see the additions and efforts made to bring the DS into the world of fake plastic instruments a little bit, well, fake. But give the game a chance and persevere with the controls and there is plenty of entertainment to be had. Long journeys and family travels make this an ideal game for holidays, but wet winter days at home would also justify this purchase.

You can support Jan by buying Band Hero