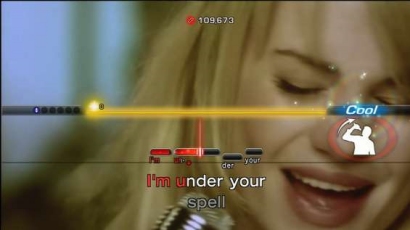 Lips is the Xbox 360's answer to SingStar on the PlayStation 3 and SingIt on the Nintendo Wii. Lips Number One Hits is a robust sequel of the main game and a refreshed song list. As the name suggests, this release includes No. 1 hits including Coldplay's Viva La Vida, Rihanna's Disturbia, MC Hammer's U Can't Touch This, Timbaland's Apologize and Culture Club's Karma Chameleon. The game comes on the Xbox 360 with interactive wireless motion-sensitive microphones. These mics are decorated with pulsating lights to get players in the party mood and respond to their movements.

Lips Number One Hits takes the original Lips game on the 360 and brings it up to date with new songs and features. With the simultaneous launch of the new Xbox Live Music Channel players can keep the game up to date with the latest hits. This makes this sequel and the original games great value for money, and an experience that can grow with the player's musical tastes. not only that but parents can cherry pick some suitable songs for their youngsters to sing, as well as muso's hunting down lesser known favourites for their singing library.

A nice addition, adopted from the recent High School Musical Dance game on the Nintendo Wii is the ability to score extra points with the Strike a Pose moments. Using the motion sensitive technology in the microphone, players can increase their score by copying the on-screen dance moves. It's a simple addition but really makes you enter in to the whole performing aesthetic of Lips Number One Hits.

Also new this time around for Lips Number One Hits is the use of Xbox LIVE avatars. Your on screen mini-me can now be incorporated into Lips. First-off your virtual self is now included on the menus - a nice touch but not hugely satisfying. More interesting though is the ability to win unique unlockable accessories for your avatar to ware, hold and play with.

As with the original Lips game, Lips Number One Hits lets those watching get in on the performing action. In addition to the usual duals, duets and harmonies up to four people can join in with a variety of percussion accompaniments. Tambourines, claps and cowbells abound as everyone joins in the music making.

It is this percussive option that I really liked. Whether I'm getting my sing-on with friends or family there are always a few who really don't want to step up to the mike. Being able to join in with some simple shaking and button pressing is a really nice touch. My kids really enjoyed tapping along while we sang too, although they were also more than happy to grab a microphone and sing their little hearts out too.

Lips Number One Hits may be seen as a simple update to the franchise, and to some extent this is pretty much what it is. But along with some nice new touches like the Xbox 360 Live Music Channel and 360 avatar's playing Lips Number One Hits was a great reminder just how strong a singing game Microsoft have created here. Packing two microphones in by default is the icing on the cake and really offers an all in one party pack for all ages.

You can support Jan by buying Lips Number One Hits