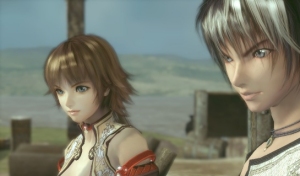 Magna Carta 2, only released on the Xbox 360, tells the story of Juto, a man stuck in the middle of a terrible civil war that threatens to destroy everything within the world of the Lanzheim Continent. The new and original storyline features strong themes such as love, hate, politics and loss to drive the experience forward for the player. With an impressive and individual art-style and a fast-paced combat system, Magna Carta 2 is an unforgettable RPG, exclusive to the Xbox360 console.

Magna Carta 2 takes place on the Lanzheim Continent where a bitter civil war is being fought, you play as Juto - a young man facing a destiny that will engulf him and those he holds most dear. Although the storyline is styled after a traditional Japanese Role Play Games, it excels at telling this story through some amazing CGI cut-scenes and a distinct art-style that will draw you into the tale.

It also goes far deeper with the themes of love and loss than other Role Play Games, taking on a politically charged narrative that ultimately leads to the discovery of the main characters destiny in an epic and moving way. Adding to this is the progression of the characters - the game is never shy about exposing their frailties or weaknesses and this method of storytelling means its easy to build up a connection and feel sympathy for these heroes.

Helping to portray the story is the photo-realistic Manga artistry of Korean Hyung-Tae Kim - who's work brings the characters and world of the Lanzheim continent to life in a unique and stylish way. Games like Eternal Sonata, Tales of Vesperia and Valkyria Chronicles on both Xbox 360 and PlayStation 3 presented their game in a very particular way and Magna Carta 2 does exactly the same - here though with a blend of Manga-style and realism.

If the overall story is a traditional take on the Japanese Role Playing Game, then the world of Turn Based and Real-time combat is really turned on its head with some interesting innovations. Instead of transitioning to a combat environment, encounters seamlessly blend the worlds of navigation and fighting without any interruption or load screens. This leads to a much smoother experience when playing the game and having quick and sharp encounters helps to keep the story and narrative pushing forward. I also found myself less often scrabbling for guides, walk throughs and tips pages, it all simply made more sense.

You can switch between party members easily in battle and also customise the way the Artificial Intelligence handles your other characters, meaning that you're always in control of what goes on in these situations. Earning Kamonds by beating up monsters can then be applied to specific weapons and subsequently generate new items and weapons. Each of these comes with a new style of fighting with special abilities to learn - ultimately progressing to a special Overdrive mode - where high damage can be dealt out with the right button presses.

This type of combat system is what gave me the most satisfaction in Magna Carta 2. It's a 360 game with a depth that's easy to get to grips with and yet offers rewarding progression. With no transitions between navigation and combat, the environment comes into play a lot more as well. Using objects or manipulating the world around my characters by using the magic system gave Magna Carta 2 a slickness very few Role Play Games are capable of. It can take a bit of practice to begin with, as botching these skills up will leave your characters overheated and exposed to attack without any defence. But the success of this particular aspect rewards you with some devastating attacks - a good balance of risk versus reward.

With such a distinct art-style and intriguing combat system, Magna Carta 2 - an exclusive Role Play Game for the Xbox 360 - tells a gripping tale with some interesting characters across a compelling world. Its quick-paced battle system and the navigational freedom make it an engaging experience for all Role Play Game fans.

You can support Jan by buying Magna Carta 2