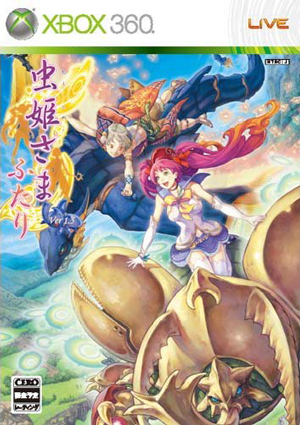 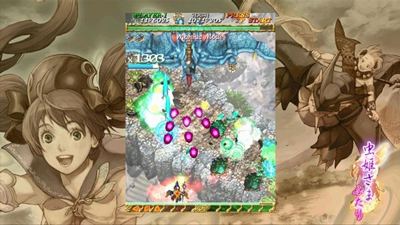 Mushihimesama Futari Ver. 1.5 is a 2D shooter exclusively released in Japan for the Xbox 360. This region-free arcade port harks back to the days of Ikaruga with the insane amount of action onscreen at the same time and the colourful visuals and addictive gameplay will keep you coming back for more. With the option to choose between the arcade and Xbox 360 graphics mode, stunning backgrounds and three challenge modes, Mushihimesama Futari taps directly into that old-school arcade vibe and is a tremendous experience that few will dare to experience.

If you're anything approaching a fan of old school shoot 'em ups then Mushihimesama Futari will scratch that particular itch until you bleed. It not only brings back memories of playing 2D shmups in the arcades but it shows that the genre still has a place on modern consoles, even if that place is only in Japan. The theme of Mushihimesama Futari is distinctly insect-like with the literal translation of the title meaning 'Together with the Bug Princess'. This gives the backgrounds of the game a very distinct look, with grotesque, yet beautifully rendered monsters and scenery portraying this theme. It's hard not to be distracted by these visuals and the new Xbox 360 graphics overhaul looks immeasurably better than the arcade version.

Choosing one of two characters from the start - Palm the dragon boy or Reco the purple-haired girl - you are plunged straight into the game and it’s a sharp reminder in these days of hand-holding tutorials that Mushihimesama Futari doesn't pull any punches with its difficulty. Enemies and purple-coloured bullets will come thick and fast after only a few seconds and it’s easy to become overwhelmed by the sheer mass of objects on the screen at once. But the difference between broken difficulty settings and a great shooter lies in the design of the patterns and Mushihimesama Futari is one of the best you are likely to play. Although you might be discouraged at first, continued play will reveal a way through the multitude of enemies and show you that persistence in a game like this eventually pays off.

It also helps that the controls in Mushihimesama Futari are incredibly responsive and easy to pick up. Moving through the air and dodging enemy fire has to feel right for a 2D shooter to have any legs and you'll never feel like the controls were to blame when you screw up in this game. It's perhaps the best conversion from arcade to console that you'll ever likely to see. In line with the arcade roots, the simplicity carries over to the firing mechanics where there's only two buttons used on the controller. One will fire ordinary shots and holding this button down will fire a concentrated laser beam. There's also the ability to speed up or slow down time if you hold the bomb button down as well - this can make all the difference between life and death in certain situations, so it's an ability necessary to master if you want to progress.

Using strategy to take out the enemies is also vital if you want to get those high scores as well. Each enemy will give you different coloured gems when they are destroyed and collecting these will increase your score. If you time your attacks right you can obtain more gems and even the larger-sized ones for bigger scores - all 2D shooter minutiae to feed the addiction.

What sells this game to me even more than the usual throwback to the classic days is the variety of modes the game offers. To start with you have 1.5 and Arrange mode. Both of those have the same further three options - Original, Maniac, and Ultra. Though they sound like different difficulty settings they're actually different scoring modes (with the exception of Ultra) and with that comes a different play-style to master. Original works by tracking how well you're doing in each stage, upgrades your rank accordingly and adjust the intensity of the next stage. Maniac works by tracking your multiplier and will adjust the gems enemies drop according to that number. Finally, Ultra is similar to Original but with an insane amount of bullets and enemies thrown at you to make it almost completely impossible to survive.

The difference between 1.5 and Arrange is an interesting one as you take control of both Revo and Palm at the same time. This is where things start to get a little mad as you have to control one character as the shield while switching to the other to attack the enemies. Switching characters gives the other a chance to recharge their shields and it’s a case of tactically planning out your moves and being aware of what's going on more than usual. Although it’s tough, this mode is ultimately the most rewarding.

Just like the 2D shooters of old, Mushihimesama Futari exclusively for Xbox 360 is a challenging and visually overwhelming feast of a game. It strays well into hardcore territory that will make casual players shake and weep, but anyone who loved Ikaruga back in the Dreamcast day will adore this modern port of a Japanese arcade classic. It's rewarding, entertaining and just like all those old-school games, will give you the good controller blisters you've been pining for after all these years.

You can support Jan by buying Mushihimesama Futari Ver. 1.5