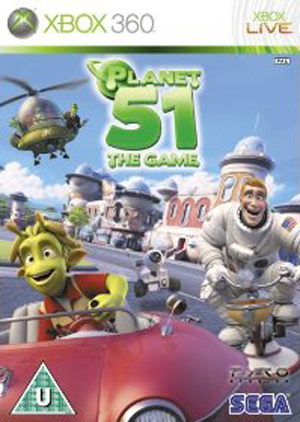 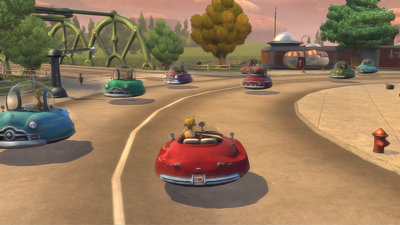 Coinciding with the film's release, Planet 51 is a rip-roaring vehicle-based action game that sees you taking the role of American astronaut 'Chuck' Baker and his alien buddy Lem, as you try to outwit and outmanoeuvre the Planet 51 police force. With the ability to take control of the main characters from the film, there are numerous missions, mini-games and multiplayer action to keep the kids entertained for hours.

At first glance, Planet 51 for Xbox 360, PS3 and Nintendo Wii captures the same look of the film incredibly well. The hovering cars and kitsch 1950's American style is replicated nicely and lends a suitably cartoony/animated air to the experience. Playing as Chuck Baker, the 'invading' astronaut, the game basis a lot of its play around those cool-looking hovering vehicles and succeeds in making the experience fast-paced and fun.

Due to its look and inherent charm the game instantly appeals to kids and there's enough variety here to keep the action fresh and interesting - maybe even enough to fend off Mario Kart Wii for a while.

The story isn't particularly gripping and feels like an excuse for the gameplay on many occasions, but in this instance that doesn't necessarily feel like a bad thing. It means you can focus on the action parts of the game and Planet 51 does an excellent job of putting you straight into the action without any needless exposition.

Most of the missions you'll undertake as Lem, the native Planet 51 inhabitant and good friend of Chuck, are vehicle-based and it's good to know that the driving sections handle really well. The hovering cars vaguely resemble 1950's automobiles and handle just as good as they look. You can effectively jump in the air to overtake other cars, strafe from side to side and even bash into your rivals to slow them down. Like all good arcade-based racers there's a boost button that enables you to go that little bit faster and the visual depiction of speed doesn't fail to give you a buzz.

A lot of these racing missions you play as Lem are job-based - meaning you'll be working as a taxi driver, lawn mower, courier etc. But Planet 51 also makes you race against the evil Voorde and these races are much rougher than the rest of the game. As well as the locations offering some variety, the opportunity to bash and harry the enemies in this aggressive way makes the game so much fun. Blasting down canals and through the desert at high speed did an excellent job of raising the excitement level higher than in any other kids racing game.

The out-of-vehicle sections were less exciting and consisted of a little light platforming and performing button sequences to get past fences or closed doors. None of it was bad and in retrospect offered a good change of place in the game away from the high-speed racing. The tedious parts were when playing as Chuck's robot Rover. These were just dull and boring and were easy to fail at times thanks to the poor camera placing. But the great feature that I found when my kids were playing this was that if you failed three times in any mission during the game you could bypass it with no penalty. It's an awesome and sensible edition that should really come into all kids’ games to stop the frustration and irritation that stems from younger players unable to progress.

My kids found the racing incredibly enjoyable, easy to pick up and very satisfying to complete. I had my doubts whether a kids racing game could match up to Mario Kart or Need for Speed Nitro, but the endearing art-style and variety of missions ended up surprising me. We played this game, despite not having seen the film, for a long time and enjoyed it immensely - the accessibility of the racing being the most positive aspect of our experience.

Planet 51 for Xbox 360, PS3 and Nintendo Wii may not have the overall polish of a dedicated racing game but the impressive visuals and endearing environment more than make up it. The non-racing parts can get a little dull but the thrill of racing through the streets of Planet 51 makes for a very entertaining experience. This is a game targeting directly at younger players but has enough to keep most age groups entertained for many hours.

You can support Jan by buying Planet 51