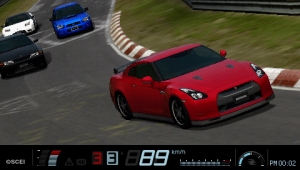 With more than 800 vehicle models and over 30 tracks, Gran Turismo brings the authentic and peerless driving simulator over to the PlayStation Portable. World famous circuits and exciting game play and game modes serve as a great introduction to the Gran Turismo series as well as providing a depth series veterans will enjoy. With its astounding 60 frames a second graphics, this the evolution in PSP games we've all been waiting for.

Developed by the same team behind the world's best-selling racing simulator GT4, Polyphony Digital have created a truly mesmeric version of Gran Turismo for the PSP. 800 vehicles and over 30 tracks have been packed into the game and the obsessional love of cars and racing has successfully transferred over to the handheld format. All the cars are licensed from the top manufacturers from around the globe, including Ferrari, Nissan, BMW, Lancia & Lotus.

When moving any big title over to a handheld system you expect a certain amount of features to drop or change. But aside from the career mode, Gran Turismo on the PlayStation Portable feels like the fully-featured PS3 console game. The level of immersion is thanks to the impressive visuals running at 60 frames a second means you forget that you're playing on a PSP and simply enjoy the experience.

The controls feel accurate and the cars handle brilliantly with a solid feeling of weight that other, home console games have yet to perfect. The way cars corner with a tangible solidness and believable momentum make this the most realistic driving game you could get on the PSP. Its advanced feel emulates the variables that real-life driving entails and is so comprehensive you wonder how they managed to pack it into the PSP. This really is the big PlayStation GT4 and GT 5 package, wrapped up small enough to fit into the handheld system.

In place of the career mode are the Driving Challenges. There are a series of tests designed to focus your driving skill on certain areas, like rounding a tricky corner perfectly. Do this well and you'll be rewarded with a trophy ranging from bronze to gold. Other challenges include Time Trial or Drift Trial with the option to simply take one of your cars for a spin in player-defined race.

The new features, or new twists on purchasing cars actually turns Gran Turismo into more of a Pokemon-style collecting game. This is because not all 800 cars are available to purchase from the start. The five dealers present in the PlayStation 3 GT5 game are replaced by five more every couple of game days. This means you have to keep an eagle-eye out for the car you're after and adds a neat monster-hunting collect 'em up vibe to the game.

Although the lack of career mode will irritate some, its not something I missed when playing Gran Turismo on the PSP. The dip-in dip-out nature of the handheld console means I just want a quick fix or challenge for a few minutes. The more involving stuff is best left to the home console. I particularly enjoyed the collection aspect of the cars. This lends itself perfectly to the PSP and appealed to my obsessional collect 'em all trait that I take into nearly every game.

I feel many will criticise Gran Turismo for what it leaves out, but when you consider that the main PS3 console game will be out next year this is the perfect aperitif and most impressive racing game on the PSP platform.

Its technical achievement and pure pick-up-and-play style mean that Gran Turismo is a superb racing game that any petrol-head should obtain. Those 360 console owners who longed to play GT5 can now do so - by opting for a PSP as their portable console companion. Gran Turismo sticks to delivering the classic GT experience of taking a car and letting you push it to breaking point on an authentic track. It's an exhilarating ride that nobody should pass up and one that everyone should experience.

You can support Jan by buying Gran Turismo