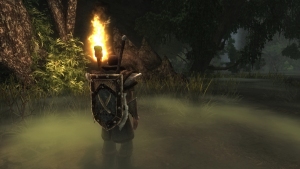 Risen on Xbox 360 and PlayStation 3 is a gritty and atmospheric Role Playing Game that puts the player in the midst of a ravaged world, beset by conflict between fearsome creatures and elemental magic. The epic world is teetering on the edge of destruction and only through your actions, as a master swordsmith, staff fighter or powerful mage can balance be restored. It features a diverse range of environments and characters voiced by Andy Serkis (Gollum from Lord of the Rings) and John Rhys-Davis (Gimli from Lord of the Rings). Risen is a raw RPG release where every action has a consequence and your 360 or PS3 recreates a living breathing fantasy world.

Delving into the world of Risen it's clear that the makers of the Gothic series of games (Pyranha Bytes) have created a stunning new world to experience and explore. Taking place in a Mediterranean setting the environments are lush and, as you progress through the story, new areas open up with their own individual style.

The story features some epic moments with mysterious temples rising up from the underground and people strangely disappearing. Due to these events an organisation called The Inquisition is set up and you very quickly have to choose whether or not you want to ally yourself with this authority or side with the rebels. The open-ended structure to Risen is also present through nearly every quest you can take on. There are multiple ways to achieve objectives and an overall reputation meter that decides how people will react to your presence.

Where as most traditional fantasy Role Play Games on the 360 and PS3 stick to the usual Elves, Goblins and Dwarf races, Risen takes a more realistic approach and lets the fantasy aspect play out in the wide array of monsters and creatures that inhabit the world instead. This gives the release a Medieval feel with authentic weapons such as staff's, swords and bows occupying most of the combat. Of course, as magic is shown from the very beginning cut-scene, there is the option to become a powerful mage as well, with the more traditional fire bolts, lightning powers and freezing spells in abundance.

Far from seeming ridiculous, this approach gives the world of Risen a raw and gritty edge that games like Oblivion and Sacred 2 simply don't have. In fact the creatures, which range from Skeleton Warriors to the more creative Rotworms and Ashbeasts, seem to hark back to the days of Ultima as well as providing a more original bestiary.

Perhaps the greatest character of the game is the environment itself. The variety of locations and the ancient feel of the world give it an oppressive atmosphere that really gives the plot urgency and the situations encountered a sense of importance. Each area of the world also has its own flora and fauna helping to add to the overall impression that this is a land existing in its own proper world.

For me, what sets Risen apart from similar efforts on the Xbox 360 and PlayStation 3 is the genuine sense of progression I felt all the way through the game. At the start, just like all RPGs, your skills are limited and it takes a while to learn and level up. But where Risen improves on other Role Play Games is the way the animation of the character actually changes during this process. The first few fights look cumbersome and awkward, but after a while my hero started to look the part with more acrobatic moves and fluid motion. It looked much more authentic rather than having the same canned movements throughout the entire game.

With such a large amount of freedom from the quest structure, Risen gives you a huge scope to play in a variety of ways depending on what style you enjoy most. There are over 300 quests that feature extensive branching paths and when you put this together with an atmospheric world and a sense of real progression, Risen becomes an addictive and compelling RPG to play. Many will be queuing to purchase this on the release date on these grounds alone.

You can support Jan by buying Risen