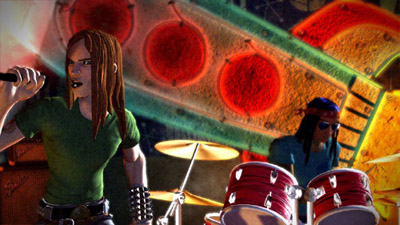 Rock Band 2 on Xbox 360, PlayStation 3 and Nintendo Wii is the most authentic and ambitious rhythm action game yet. With a full complement of instruments including lead guitar, bass guitar, drums and microphone, it offers the complete package. But more than the novelties and modes of Guitar Hero, Rockband 2 is all about the music. It offers the added bonus of a vast library of downloadable content including songs from System of a Down, Foo Fighters, Red Hot Chilli Peppers, Elvis Costello and The Who, there's really something for everyone.

Rock Band 2 on the 360, PS3 and Wii carries on where the first game from Harmonix game left off, and doesn't reinvent the wheel. At first glance there's very little to differentiate between the two. The on-screen action looks the same, the instruments initially feel the same and presentation wise this is familiar territory. But this is where Harmonix shows how well it understands these rhythm action games by not needing to rewrite the rule book. Instead, the differences this time around are subtle and discreet - and all the more effective for it.

First off, and perhaps most importantly, it's possible to import just about all of the songs from the first game. For around GBP5 you can install songs from the first Rockband game onto your hard drive, removing the need to juggle between the two disks - a feature that would be great in SingStar with its multiple discs. Secondly, all downloadable content from the first game can also be played in the sequel. Thirdly, the game's instruments are improved and are now a lot more durable. The drums are now wireless and there's an expansion port to support cymbal pads. And finally, the sequel's drum tutor is brilliantly implemented. After some time with it you will be filling those drum breaks with your own in-time rhythmic beats instead of just random clattering.

Rock Band 2 is also perfect for the beginner and expert alike thanks to its new no-fail mode. While the easy and medium difficulty levels are great at easing in people new to the franchise, the more confident among you can really let yourselves go on expert mode, which while taxing, never feels unfair or like the game is cheating. The note tracking also always feels absolutely spot-on and like you're hitting every single authentic note as opposed to randomly playing away even where there isn't one just to increase the difficulty.

I alluded to the quality of the visuals earlier and while they're not drastically different in Rock Band 2, the little things like the near-perfect lip-synching and how the drummer is animated perfectly in line with how you're bashing along, all combine to make this a brilliant all-round experience. The new venues, replete with glorious light-shows, all help amplify that euphoric feeling of being in a band and when you start performing well and can hear the crowd singing along with you, it never fails to raise the hairs on the back of your neck.

Rock Band 2's multiplayer modes are also now much easier to get into and more convenient. With drop-in drop-out play, proper Xbox live support including the ability to have members of your band in another country and the all-new battle mode there's plenty to keep you playing longer after you've got bored with 85+ songs that ship with the game.

Although single player can be slightly lonely, with the song choices tailored specifically to cater for all of the instruments that make up the sum of each song's parts, it isn't hard to find a few friends and family to play with. Rock Band 2 is a lot like Wii Sports Resort - it's one of those games that are instinctive and intuitive. Pretty much anyone can be presented with the novel controllers and instantly know what they have to do. Even non-gamer friends were soon singing along and having a crack at the drums.

As if to prove the point perfectly, I attended a recent barbecue and there were people among the crowd who'd never seen or played the game before and took one look at the Fisher-Price-esque instruments and mocked those of us that were having a great time with it. That was until five minutes later they were screaming a drunken version of You Oughta Know by Alanis Morissette down the microphone for everyone to hear, before quickly declaring the game as the second-coming.

The original Rock Band was the ultimately party game and Rock Band 2 on the 360, PS3 and Wii proves itself to be even bigger, better and with an even broader appeal. There's really no reason not to buy this if you haven't played the series before, you really won't regret it.

You can support Jan by buying Rock Band 2