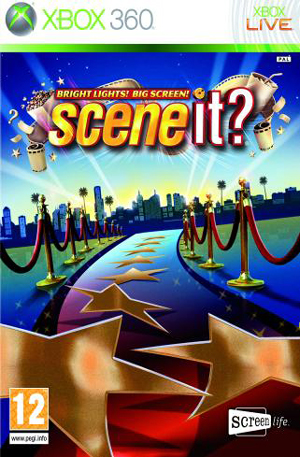 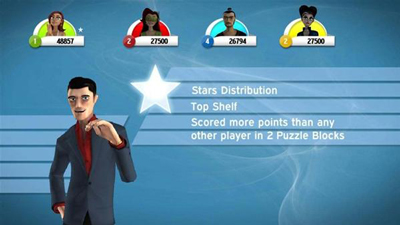 The popular videogame quiz show series returns with Scene It? Bright Lights for Xbox 360, PS3 and Wii. For the first time on the major console platforms you can experience the thrill and fun of competing against three of your friends in an all-new game based around recently released movies as well Hollywood hits from the past four years. With thousands of new questions, minigames, different play modes and an experience that will get any party going, Scene It? Bright Lights! Big Screen! is essential for the holiday season.

The Scene It? games have traditionally always been restricted to the Xbox 360. But now with Scene It? Bright Lights! Big Screen! players on PS3 or Wii can take part in this excellent videogame quiz show. This latest version of the series isn't just a yearly update to include some 2009 films, it also offers some new play modes and over twenty different puzzle types -meaning that there's much more variety included in the box than ever before.

The general format of the game hasn't changed dramatically from the past two iterations and although it might seem little more than an expansion pack for those who have played Scene It before, newcomers will find a lot of party-friendly fun here. It's this party-focused feel that makes Bright Lights, Big Screen a real must for any social gathering. The multiplayer modes are what make this game fun and with online modes as well as local play, there's no reason to play this on your own.

The three main multiplayer modes carry over from the previous games with Party Play consisting of non-stop puzzles with drop-in drop-out muliplayer that's perfect for parties or social gatherings. The Play Now mode is a little different and offers both a short mode for quick bursts of play and a longer option that consists of three or five rounds of questions. The other mode is Fast Fire and is all about answering as many questions as you can within five minutes. It's a little frenetic and out of all the options Play Now offers the best structure for a decent night’s entertainment.

The structure of the actual quiz game remains the same with each round starting with a film clip and then followed by appropriate questions. What makes this Scene It a little different are the puzzle questions that follow after. Although most are taken from previous games there are enough new types to keep previous players of the series interested - and if this is your first Scene It game then there's an awful lot to keep you playing. The best puzzles modes are the familiar ones and Pixel Flix is a personal favourite of mine where you have to guess the movie through an 8-bit artistic interpretation. There's something about that art-style and the Child's Play, where you guess on the basis of a Kid's sketch that really makes Scene It stand out amongst other quiz games.

Other modes aren't quite so visually appealing and consist of putting films in their chronological order or solving anagrams of film names. These are ok but a bit more creativity to keep the experience interesting wouldn't have gone amiss either.

The presentation of Bright Lights, Big Screen is one feature I'm a little unsure about. Previous games have been a little cluttered and lengthy - mainly due to the time spent travelling around the film set just to show off some flashy visuals. This arduous stuff has all gone away and while the improved speed of the game makes it easy to burn through quiz sessions easily, it consequently starts to feel a little cheap. One aspect that I don't like is the absence of Avatar support for the Xbox 360 version. Instead you get to pick from a cast of twelve preset characters that just aren't as pleasing. It's a minor gripe and one that’s irrelevant on the PS3 or Wii, but it nevertheless irritated me.

If you've played previous Scene It games then you might find Bright Lights Big Screen a little underwhelming due to its slight decrease in presentation, but if you’re a newcomer to the series then this is a great game to have for parties. It serves up a lot of great multiplayer fun and the variety in the questions, films and puzzle modes means it will keep everyone entertained all through the night.

You can support Jan by buying Scene It? Bright Lights! Big Screen!