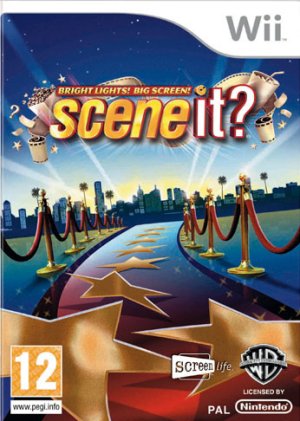 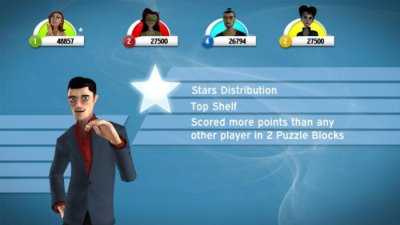 Scene It? Bright Lights! Big Screen! brings the 360 Scene It? film quiz to both PlayStation 3 and Nintendo Wii as well as updating the series as a whole. While the release is not without compromise to make it cross-platform, it continues to create a family friendly movie quiz experience around a strong set of questions.

Like the original, Scene It? Bright Lights! Big Screen! is built around an impressive amount of film footage and photos. These range from straight clips to more novel edited segments where a key character or object has been masked out. These then lead onto a series of questions that first focus on the clip itself before broadening out into more general trivia about the characters, locations and directors involved.

Scene It? Bright Lights! Big Screen! has always been about the quality, depth and range of questions on offer.

Although some players may find that the switch from 360 to embrace both PS3 and Wii results in a game that is slightly more generic. The avatars and Xbox live features take a hit along the way to be replaced by more generic cross-platform friendly characters. But to focus on this is to miss the point. Scene It? Bright Lights! Big Screen! has always been about the quality, depth and range of questions on offer. Here the increased revenue available from multiple formats has obviously resulted in more investment. The clips and questions are as good as ever and keep a firm eye on the family audience by embracing a wider range of genres and age groups.

Along the same lines, Scene It? Bright Lights! Big Screen! the pace of things is also a lot more sedate than the brash clubby aesthetic of Buzz on PS3 and even TV Show Quiz Party and Smarty Pants on the Wii. This more sedate pacing meant that our family could all keep up with progress in the game without the need for younger members have things explained to them by us parents - which they hate.

Playing with some friends who have the 360 Scene It? game we realised that the scoring had been improved this time around. It's a little bug-bear of mine that quiz shows, whether on TV or game console, often put too much weight on the later rounds. Players can ignore the first few rounds and simply clean up at the end. Thankfully Scene It? Bright Lights! Big Screen! does away with the loser's bonus and instead offers some specific awards for players that answer quickly and accurately in the previous round. This combines with a star system that lets players buy mini-game opportunities to win points multipliers to create really competitive sessions.

For families this really is a lot of fun.

Seeing this version of Scene It? Bright Lights! Big Screen! on all three major consoles, PS3, 360 and Wii, meant that I could recommend it to many more friends. Although purists and hard-core players may miss the original's 360 specific features, and it would be nice to see Mii support in subsequent versions, for families this really is a lot of fun. It even get's close to challenging the excellent Think Fast trivia quiz on the Wii.

You can support Andy by buying Scene It? Bright Lights! Big Screen!