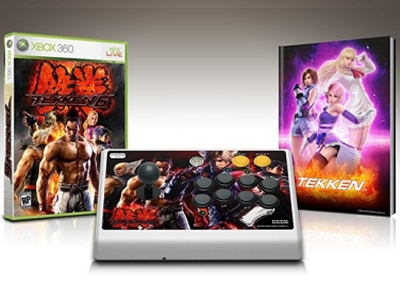 This is the companion arcade stick controller for Tekken 6 on the Xbox 360 console. Featuring a custom decal layout with selections of box art set against the black and yellow buttons; it looks simply fantastic. The Tekken 6 Real Arcade Pro Joystick which uses the same form-factor and case of the other Real Arcade Pro sticks. Similar to earlier HRAPs, the new stick uses actual arcade buttons and a clicky Sanwa lollipop-style joystick to give gamers an authentic coin-op experience at home.

While a lot of games have special editions nowadays, very few have their own official controller, let alone an arcade variant of it. Tekken 6 is different in that respect, with the special edition packing an arcade stick designed specifically for this title.

Based off of the original Hori design, this controller has been customised to fit in with the Tekken universe beautifully, while fully capturing the traditional arcade feel of public Japanese game machines. To help accomplish this, and appease the old school followers of the at-home arcade craze, the controller uses the traditional Hori Real Arcade Pro design and casing, which are ergonomically designed to be simultaneously comfortable, and faithful to the original arcade cabinet builds.

Enthusiasts of arcade stick gaming will also be pleased to hear that the stick itself is based on the Sanwa design, and is nearly identical to the one used throughout Japan and the US on their Tekken arcade machines.

However, the developers haven't just catered to the hardcore; the less experienced arcade gamer also gets a look in. For those who may not be as familiar with arcade stick game play the button layout is well thought out, and sees the main buttons - A, B, X, Y - placed in a clockwise fashion from bottom left, to top right meaning the players four main fingers are already in the correct positions to hit these essential keys.

The less commonly pressed buttons are mapped elsewhere, with the shoulder buttons sitting in the top right - highlighted in yellow to easily differentiate them from the rest - and the Xbox hub button located in direct centre to make its placement obvious.

Functionality of this arcade stick has also been increased. Not only does it give you the freedom to play anywhere you want, but technically it should allow you to place the arcade stick in an elevated position much more easily, giving players the option to recreate a standing arcade setup in their own home, with ease.

However, function hasn't trumped style with the Tekken 6 arcade stick, and its white body is beautifully offset by the highly detailed artwork that provides a backdrop for the controller buttons and stick. Taken from the box art, the main characters from the franchise stare out at the player devilishly, making this one great looking accessory for the 360 console.

Since I wasn't overly experienced in using arcade controllers on the Xbox 360, it was a pleasant surprise to note the button layout was so intuitive, and the stick so familiar to my arcade experiences that I found it incredibly easy to move from standard dual axis controller, to the Tekken 6 arcade stick. It's the combination of user friendly interface, with traditional arcade build quality and design that make this controller a winner for me.

When it comes to playing beat 'em up games, there really is nothing better that taking on a friend at a licensed Tekken 6 arcade machine; and wiping the floor with them. However, now you don't need to go out to accomplish this, you can do so in your own home using your branded arcade stick controller, and you know the experience will be just as good.

You can support Jan by buying Tekken 6 Arcade Stick