Where The Wild Things Are 360 Guide

Where The Wild Things Are 360 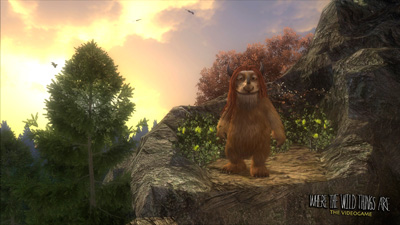 Based on the 1963 picture book of the same name, Where The Wilds Things Are for the Xbox 360, PS3, Wii and DS tells the story of Max and his encounters in the land of the Wild Things. Directly inspired from the upcoming film adaptation, you’ll be helping to save the Wild Things and their land from destruction in an array of puzzle, platforming and action-based gameplay. With the characters of the book and film coming to life in this extraordinary way, you'll soon be romping alongside your favourite creatures in this incredible adaption.

Taking on the role of Max as he explores the fantastical island, Where The Wild Things Are is a stellar adaptation of the classic children’s book and the Spike Jonze-directed upcoming film release. Like most videogames aimed at the film tie-in market, this game blends platforming and light combat together for a varied and interesting experience.

Following the story of the book and film closely, Where The Wild Things Are gets itself off to a flyer with some great platforming sections. The move set that Max is capable of performing is very reminiscent of Uncharted: Drake's Fortune in many ways. Max doesn't move with quite the same amount of class as Nathan Drake, but to have that level of detail and attention in a game like this speaks volumes to its quality. The way the game is laid out in these sections is very satisfying and keeps the variety going with some interesting and exciting set-pieces.

Before long you'll be running, jumping, climbing and swinging across the terrain of the land only to face some enemies in combat. Although the attacks Max has at his disposal are limited in scope, it's still satisfying enough to engage younger players and keep them on their toes when facing a variety of bug-like bad guys. The design of the game allows you to rush into fights without worrying too much about losing large amounts of health. The frequent health drops might irritate adult players looking for a challenge, but as this is targeted towards children, Where The Wild Things Are succeeds in making all aspects of its game accessible to the right audience.

What sets this game apart from other children’s book/film adaptations is how much darker some elements of the story are. The original book had many darker threads running through its narrative and although the videogame doesn't display them obviously, you’ll wonder if these Wild Things can actually be trusted and worry that they’ll turn on you at any moment. This, plus the visual way the island starts to fall apart, gives the game an edge many other titles simply fail to achieve. It's unusual for a children's game to carry so much atmosphere within its simple mechanics but there's a bizarre blend of foreboding, mystery and peace mixed under the experience here - which is exactly what a true adaptation of the book should convey.

This atmosphere is what impressed me the most about the game. Its overall feel and visual look kept me and my kids enthralled until the final scene. And it's here that the game pulls all the best parts together for one moment that truly resonated with me. The speed of the action, the platforming and the setting all combine for a final level that makes playing the game to the end worthwhile. It's worth noting that the final cut-scene carries some emotional weight that may surprise some players and its inclusion confirmed to me that Where The Wilds Things Are has been crafted with real care and attention.

Unlike most movie adaptations, Where The Wilds Things Are for the Xbox 360, PS3, Wii and DS, is a game with a very impressive atmosphere that shows the right balance of maturity and light-heartedness that all children's games should have. Similar to Coraline in look and feel, Where The Wilds Things Are is a game worth playing to its incredible conclusion and conveys the essence of the book and film perfectly.

You can support Jan by buying Where The Wild Things Are