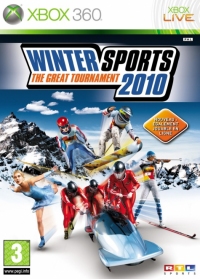 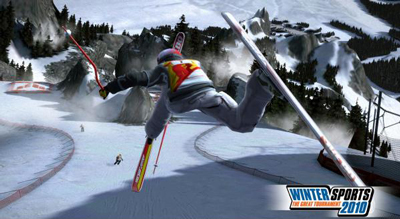 Winter Sports 2010: The Great Tournament for Wii, Xbox 360 and PS3 offers eight unique and distinct sports for players to experience whilst also introducing a complex career mode that puts other Winter Sports games to shame. With its story-based campaign that includes many role-playing elements, special skills and upgrades, Winter Sports 2010 is the most involving winter sports game ever to grace the console market.

Winter Sports 2010: The Great Tournament for Nintendo Wii, Xbox 360 and PS3 has been completely reworked from the ground up this year in order to take the series into exciting new territory. Aside from being a thinly-veiled unofficial game to the Vancouver 2010 Winter Olympics, Winter Sports 2010 doesn't just reproduce the same events from that competition but actually reworks them into a compelling story mode complete with role-playing elements.

This approach gives the game a much-needed uniqueness to separate it from Vancouver 2010 and it addresses any similarities by creating its very own fiction and story mode to draw you into its world. There's a decent amount of depth to this part of the game and you take your own character from lowly beginnings to challenge for world championship status for the country of your choice. It's pretty much akin to going through the process of qualifying and competing in the Winter Olympic Games really. The biggest difference is that there's no dry commentary or boring results tables to worry about. The presentation is unique and as funky as you could get for a winter sports game.

Unfortunately the lack of different events threatens to undo all this good work as there are only eight disciplines to compete in. Given that Mario and Sonic at the Winter Olympic Games has over forty, it makes Winter Sports 2010 feel hamstrung by this small amount. It's a shame as the events gathered in the game are good, even the curious Curling sport is well-represented and quite enjoyable to play. Fortunately the eight events are significantly different from each other to make the game feel like it has a decent amount of variety. It also helps that the game will choose between two courses depending upon the difficulty setting chosen for those events that take place outside – a nice touch that also gives the game some much needed replay value.

Control-wise the various events all combine a mixture of waggling the Wii remote or analogue sticks and pressing buttons at the right time. It's not as skill-based as Vancouver 2010 but it's not the waggle-fest we've been used to in previous games. One moment where this stands out in particular is in the Speed Skating event where hitting the right button at the right time initiates a boost move to overtake your opponent. Pulling this off successfully is highly satisfying and the game does a good job of rewarding you for your hard work in this way.

The difficulty setting also changes the amount of skill required to hit the right button combination and its accessibility means that Winter Sports 2010 is another game suitable for family parties or social gatherings.

What impressed me the most about Winter Sports 2010 is the decision to give the game a recognisable career mode. Previous Olympic-like videogames have been stale and boring affairs with no semblance of narrative to make the player care about their athlete from one event to the next. I was surprised to find myself carefully choosing me next upgrade path so I could develop my athlete in the best way possible. With the 44 challenges giving the eight events a good degree of variety despite their small number, I found Winter Sports 2010 a surprisingly entertaining play.

Winter Sports 2010: The Great Tournament for Nintendo Wii, Xbox 306 and PS3 could be easily dismissed as the unofficial and inferior Winter Olympic videogame, but its unique approach offers something different for the sports fan. With an engaging career mode and online multiplayer, Winter Sports 2010 shows that the tournament videogame genre still offers compelling variety that winter sports fans will be desperate to try out.

You can support Jan by buying Winter Sports 2010: The Great Tournament