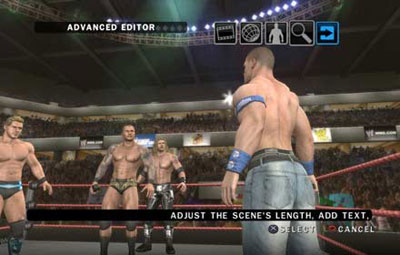 The official, authentic WWE wrestling experience is back, in the 2010 edition of Smackdown vs Raw on 360 and PS3 that brings a new level of perfection to previously lauded features. Along with unparalleled creation tools, a fleshed out superstar roster and key franchise tweaks, WWE Smackdown vs Raw 2010 on Xbox 360 and PlayStation 3 gives the player the freedom to create their own game play experience within the divisions of World Wrestling Entertainment.

WWE Smackdown vs Raw 2010 not only updates rosters with the latest competitors, it also brings a heady mix of impressive visuals, detailed customisation and solid wrestling fun to the party. While games like Fight Night Round 4, Ultimate Fighting Championship (UFC) and EA's Mixed Martial Arts (MMA) take fighting in a more serious direction, WWE Smackdown vs Raw 2010 continues to revel in the sheer cabaret, fashion and moves of Wrestlemania.

In WWE Smackdown vs Raw 2010, the traditional create-a-superstar mode is back, with a refreshed look to its customisation interface and improved graphical quality bringing a whole new level of realism to player creations. Load times between menus have been decreased, making the creation experience a lot more streamlined and less time consuming. A nice new touch of applying original tattoos to personalise the player's superstar has also been added. The new paint tool brings player created characters in line with the detail found in the real life stars of WWE.

The dress-up fun continues as clothing can also now be fully customised. All items can be minutely tweaked to perfect that real wrestler look. Think the Undertaker would look better in hot rod red than black? It's now possible. However, should you not want your favourite superstar to wear this outfit all the time, you can create up to three alternate attires, giving players the option of a standard wrestling outfit, perhaps a more refined get up for storyline purposes and something wacky for the custom events.

Move set wise, the creation tool has been expanded again, further developing the custom finishers feature seen in the last iteration of this 360 and PS3 title. Diving finishing moves from atop the turnbuckle can now be created, along with combination attacks that string together not only strikes and grapples, but taunts, take offs and descents; making for one hell of a way to end a fight. All these move sets and custom characters can be shared with other users across Xbox live, as well as automatic highlight reels being created to show the best moments of any online match a player has.

Taking the creation mode in an entirely new direction, players can now create their own backstage drama, with the story designer. This allows users to become living room directors, giving them the ability to customise unique storylines for their characters, and real life superstars. Script writing, camera angles, emotions, unique matches, music; all these tools are at the disposal of the erstwhile Vince McMahon.

The more linear gamers may be more interested in the Road to Wrestlemania story, which is back and better than ever. With brand new events, and key updates including a new diva storyline and one put together especially for created wrestlers, this feature looks set to please hardcore fans and casual players of Smackdown vs Raw alike.

I've never been particularly adept at utilising the in-game creation modes. I'm usually the guy that gets bored half way through, hits randomise, and gets on with playing the game. However, with WWE 2010, I couldn't help but spend a long time putting the finishing touches on my megalith of wanton destruction. Customising his skill set, clothing, appearance and storyline made this game really come to life, and gives it ultimately unlimited hours of play as gamers should be able to extend the story of their superstar indefinitely.

When it comes to Wrestling, there really is only one game franchise that should be considered, WWE Smackdown vs Raw, and the latest version of it is no different. More serious fighting fanatics may prefer Fight Night Round 4, Ultimate Fighting Championship (UFC) and EA's Mixed Martial Arts (MMA) but this is where the real fun is. For wrestling fans, it really doesn't get any better than this.

You can support Jan by buying WWE Smackdown vs Raw 2010