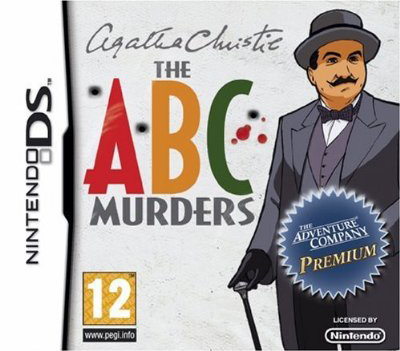 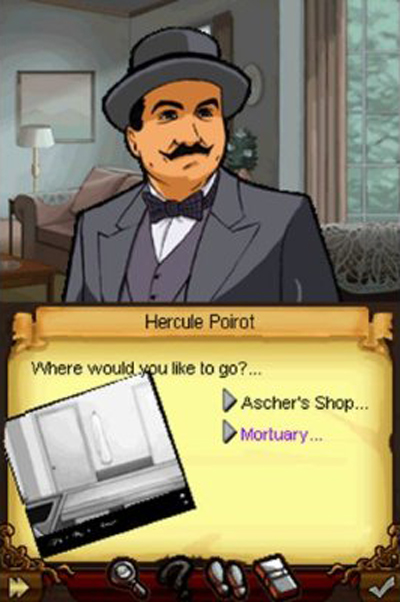 Agatha Christie: The ABC Murders DS confidently turns literature into puzzles without loosing the sense of intrigue. A gently unravelling tale coerces players through each challenge with great finesse.

Based on the book of the same name Agatha Christie: The ABC Murders for the Nintendo DS transports players into the world of Hercule Poirot as he tries to solve the fiendish murders of a mysterious killer. Playing as the famous detective's side-kick Captain Hastings, you'll attempt to get to the bottom of this difficult case by solving riddles and puzzles. Using this combination of a strong story and challenging brain-teasers, Agatha Christie: The ABC Murders is sure to appeal to fans of Agatha Christie's novels as well as gamers who love similar games like Phoenix Wright or Professor Layton.

Basing a puzzle game off the acclaimed novels by Agatha Christie should be a sound idea for success and The ABC Murders for Nintendo DS is a faithful adaptation of the book. The decision to base the story around Captain Hastings’s investigation rather than allowing you to play as the famous Belgian sleuth also means Hercule Poirot occupies more of the story than he otherwise would. Interacting with one of literature most famous characters is quite a thrill and you'll find that the dialogue part of the game almost as much fun as the actual puzzle solving.

The game progresses by combining dialogue and puzzles in a satisfying way. You'll interrogate or interview suspects and witnesses who will then give you clues to help piece together the case and ultimately identify the killer. Some of these puzzles are downright fiendish - very similar in some respects to the ones found in Professor Layton that also send you for a loop. They aren't anywhere near as abundant as the ones found in that game and having a challenging brain-teaser pop up every now and again is an excellent way of reminding you that this is a game that requires some serious thinking.

The rest of the puzzles offer a good variety of types, ranging from logic riddles to arithmetic and anagram-based teasers. But the best ones come up when you have to ascertain the exact time the murder took place by corroborating various witness statements. Here the game feels more like a proper murder investigation rather than simply a puzzle game to pass a couple of hours. The presentation during these puzzles is also excellent and helps to build the classic literature atmosphere by having you write on the touchpad and produce some exquisite handwriting on the screen.

When you're not solving puzzles the game moves into more dialogue-based game play and Agatha Christie: The ABC Murders has a great script backing up the experience. Characters will say and do things that feel completely appropriate for the world of Agatha Christie with snooty gentlemen, annoying waitresses, distraught loved ones all recreating the same feeling from the books. It's a little bit like having one of the novels come to life in your hand although it would have been better if the portraits of the characters changed expression from time to time - no matter what they're saying the same stony expression stares back out at you.

What I found the most satisfying part of this game was how well it conveyed the same time and sense of place as the books did. The game is by no means a literary classic, but it successfully portrays a world that's very different to other games and I found it just as enjoyable as playing the excellent Professor Layton. Though the standard of puzzles and presentation isn't quite as high as that game, Agatha Christie: The ABC Murders has a great sense of pace to it. The beginning few hours built slowly and I really enjoyed the process of revealing the killer after several hours of involved play.

Agatha Christie: The ABC Murders for Nintendo DS shows that classic literature has a place in the world of videogames with this excellent puzzle game adaptation. It's not quite up to the same level of polish as Professor Layton but the variety of riddles, the involving dialogue system and the general feel of the game means it’s worth picking up if you're a fan of Agatha Christie or puzzle games in general. It doesn't fall into the trap of being a pulp-fiction murder/mystery and the gentle pacing of the game means it should appeal to more casual players as well as those well-versed in the arts of brain-teasing videogame. If you enjoy a game that taxes your brain and makes you think then Agatha Christie: The ABC Murders for the DS is an excellent choice.

You can support Jan by buying Agatha Christie: The ABC Murders