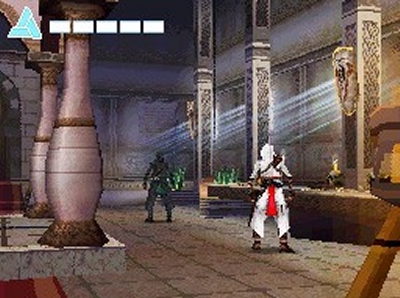 Assassin's Creed 2: Discovery for the Nintendo DS gives you the chance to play a separate adventure in the life of Ezio, the Italian Assassin, fifteen years after the events in the main game as a supplement to the story to Assassin's Creed 2 on 360 and PS3. This 2D, side-scrolling adventure keeps the action moving quickly with a good range of stealth-based gameplay and hand-to-hand combat. With the addition of some climbing and jumping mechanics, this is a more arcade-style interpretation of the Assassin's Creed franchise which makes for a refreshing and satisfying change.

Differing completely from the 3D-action mechanics of the main console games, Assassin's Creed 2: Discovery for the DS is a welcome change of pace from the usual handheld ports of the big PS3 and Xbox 360 games. Instead of trying to replicate the main Assassin's Creed experience this DS version strips down the gameplay and turns it into a 2D side-scroller that's as fast and as frantic as a Sonic the Hedgehog game.

This is not a bad comparison to make as it gives the DS version a unique skew on the familiar stealth-based gameplay we've come to expect. You still get to creep up behind enemies and take them out in a stealthy and unseen way but the game moves far more towards the 2D arcade stylings of old than you might expect.

Controlling Ezio by means of the D-pad, the aim is to either sneak behind guards or make your way through the level as quickly as possible by running and climbing to higher tiers. Quickly assassinating guards before they know what's going on is the most satisfying part to the combat, although facing them in hand-to-hand combat by using a series of attacks, blocks and counters can lead to some intense moments. Even with the option to move more stealthily, most of the levels go by quickly and many are designed to just time how quickly you can move through them.

This arcade styling will undoubtedly put some people off, but it has its own charm and you cannot deny how addictive the experience is when you try to make it through a level as quick as possible, performing as many stealth-kills as you can. After each level you get ranked on those two elements and it really feeds into the high-score addiction of the arcade game of old.

The unique twist to this is the Notoriety element that you also get ranked on. This involves certain 'wanted' posters that are strewn about the levels and your Notoriety can be reduced by ripping these down in-game. These are also linked to certain unlocks, like health regeneration, more agile climbing abilities, disguises and other difficulty settings for the game. This is where the DSi comes in handy as these posters can be customised by using the camera - though it can lead to a slightly out-of-place feel when you see your own face on these wanted notices.

I have to admire how different Assassin's Creed 2: Discovery is compared to what I expected - the previous DS game was a less-than-excellent 3D version of the main console game and it’s refreshing to see such a unique twist on the franchise. The quick paced levels are as far away from the three dimensional, open-world nature of the games on the PS3, Xbox 360 and PSP and I have to admit to becoming addicted to getting as high a score as possible in this game.

You can support Jan by buying Assassin's Creed 2: Discovery